Upon the questioning of Phoenix Group informant, Roland Kunst, RAINBOW has discovered an American branch of the Phoenix group operating in Idaho. Not only that, but the facility being run by the group is for biochemical testing on kidnapped people, who sufferer severe sickness and eventual death. RAINBOW is tasked with the objective of shutting down these operations, preventing any escape of the leaders with the samples of the virus.

John Clark - Our interrogations have finished with Mr. Kunst. This is much bigger than we thought. We've traced the laboratory supply house purchase records and it looks like Phoenix has set up a Level 4 biological containment facility less than thirty miles from Twin Falls. God only knows what they're doing in there, but the U.S. government has given us the sanction to go in and find out. It's not going to be a picnic. The only upside is that they won't be expecting you. If you're quick you might be able to take them down without firing a shot.

Anne Lang - I must urge caution. The only evidence we have that anything illegal is going on is the word of this Kunst character - I must say hardly the most reliable of witnesses. Please don't get me wrong - I have the greatest respect for Mr. Clark and this unit - but if any innocent civilians are injured in this ... precipitous raid, I'm afraid the White House will be forced to disavow all knowledge of your actions.

Catherine Winston - If this really is a Level 4 facility you'll need biohazard suits. Level 4 means the agent is airborne, highly contagious, and very, very deadly. If the integrity of one of your suits is compromised in any way then that's it ... game over.

The hotzone consists of one biochemical facility with a lot in the back and an entrance to the side. RAINBOW is inserted behind this building and two living quarters. Inside the facility there are two areas in which RAINBOW operatives MUST wear Bio-suits or the mission would automatically fail as the virus would spread. There are security cameras that cannot be deactivated and once RAINBOW is seen, the leaders will try to escape. Depending on the difficulty, terrorist leaders with virus samples will try to escape down a large street either by foot or by a jeep waiting outside, and the escape of the leaders results in an automatic failure. The only way to successfully complete the mission is to neutralize all terrorists (The higher the difficulty, the more terrorists will be added, and more leaders are present, meaning more people will try to escape)

All terrorists must be eliminated, but the leaders are the top priority. It is suggested the living quarters are cleared out first, then the jeep must be guarded to prevent leaders from escaping. The only possible ways to fail this mission is if all operatives die or if enemy leaders escape. While there are virus victims are present, they cannot be rescued since their exposure to the environment would cause a pandemic and their deaths are inevitable. This mission also begins to show Phoenix being the main antagonistic group of the game. No matter the difficulty, the objective will remain the same. The success of this mission shows RAINBOW operatives in the facility around a dead Phoenix member, while its failure shows an image of two Rainbow Operatives dead in the facility.

Phoenix members are much more difficult and are no longer dressed as lightly armored workers. These terrorists have vests and assault rifles, and will not be afraid to flee for the jeep. It is suggested the jeep is guarded so escape is likely impossible. The leaders do not appear differently from the other terrorists, so be careful. There are however, unique models of Phoenix Group members with gas masks, but only in the biochemical rooms (as they would die without them). It is suggested to go around the facility the long way and enter the lot to avoid being seen by cameras and at least maintaining the element of surprise. Look out for members in the living quarters though, as they can snipe the player and his/her teammates through the window.

Laboratory protocols group all biological hazards into four categories. The levels are designed in ascending order by degree of protection required for personnel working with the agent.

Level 1 - Agent not known to cause disease in healthy adults. No safety equipment required.

RAINBOW operatives should note that when operating in the vicinity of a Level 4 agent, any breach of suit integrity may result in death, and any release of such an agent into the outside environment may have unforeseen and potentially serious consequences. 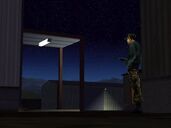