Operation Frost Light is the fifteenth mission in Tom Clancy's Rainbow Six: Rogue Spear. The multiplayer version of the level is Casino (Spring)

Susan Holt and Lukyan Barsukov have been captured by Kutkin's men and taken to his spa near Smolensk. Barsukov is believed to possess valuable information about Vezirzade's nuclear capabilities. Your mission is to take the spa by force and free both Holt and Barsukov.

John Clark - Bad news. We recovered two devices from the Siberian operation, but the records show that two more have already been transported west. We think Kutkin has them, but he'll be looking to make the exchange with Vezirzade as soon as possible. That exchange cannot be allowed to take place. A bomb that size detonated in a major metropolitan area would kill millions.

Barsukov was betrayed by his own men. Apparently Kutkin had been plotting to get rid of the old man for years. It was just our bad luck that Dr. Holt happened to be at his house when they came for him. We've got to get them out.

Your mission is to rescue Susan Holt and Lukyan Barsukov from Kutkin's spa. They are being held in separate wings of the estate. Their exact locations are unknown, but intel's best guess is marked on your map. Be aware that if Kutkin's men realize the spa is under attack both hostages will likely be moved to safer locations and possibly, executed.

RAINBOW recovered two examples of this weapon from a secret manufacturing facility in Siberia. The bomb is a typical implosion device consisting of a sub-critical mass of plutonium surrounded by a spherical high-explosive jacket. Weight of the device is kept to a minimum by the omission of the uranium damper, which consequentially reduces the device's yield. Computer analysis suggests the destructive capability of the device if detonated would be in the two to five kiloton range - small compared to modern strategic weapons, which typically are in the megaton range, but large enough to achieve nearly 100% mortality within a 1-mile radius of the hypocenter. 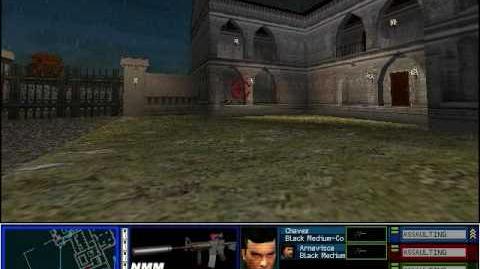