Neo-Marxist terrorists have taken over the Pirate Adventure ride at the World Park Amusement Park in Barcelona. Several tourists are being held hostage in the center of the attraction.

John Clark - Park security is contracted out to a private company called Global Security. They're also handling security at the summer games in Sydney next month so they want to keep publicity about this World Park incident to a minimum. The Spanish authorities and the park management feel the same way - this is a potential public relations nightmare for all of them. We go in, we get the kids, and we get out.

Park security have sealed off the attraction. You can access the attraction either by the main entrance or a back alley. The public areas of the park are connected by maintenance hallways and catwalks. Two new operatives have been assigned to your team. Park security has provided RAINBOW with heartbeat sensors around the perimeter.

Rainbow's objective is to rescue all the hostages. There are five of them. Two are grown men, one is a grown woman, one is a boy, and one is a girl. Their relationship  between each other is not mentioned, so it is unknown if they are family or not. On veteran or elite, the boy hostage  is somehow separated from the rest of the hostages. On veteran, one terrorist searches for him while two search for him on elite difficulty. If the terrorists find the boy, they will kill him, possibly because they believe he tried to escape. The player may either escort the hostages to the extraction zone or kill all the terrorists. The mission is a failure if a hostage is killed or if all RAINBOW operatives are killed. Succeeding in the mission shows an image of RAINBOW escorting the hostages, but failing shows an image of the terrorists aiming at the hostages. One male hostage is dead, while a terrorist is shown shooting the boy hostage. The rest of the hostages flinch due to the gunfire.

The terrorists are lightly armed, and they patrol mostly around the first floor. The catwalks are lightly patrolled, and offer views down onto where the hostages are being kept. The higher the difficulty, the more terrorists there are, but since it is a small group of terrorists that are very disorganized, there are less than 15 terrorists on the hardest difficulty. They have no body armor and are not very bright. The only thing that makes this mission difficult is the large amount of hostages.

On some versions of the game, there is a glitch which prevents the player from completing this mission without cheating. The glitch limits the amount of terrorists spawning in the map, which leaves most of it unprotected.

However, the glitch also removes one of the hostages, leaving four behind. Since all of the hostages must be escorted to the safe zone, this renders the mission un-completable.

If this happens to you, then you can enter debug mode via the console , on the PC version, and force the mission to end.

Neo-Marxist Terrorist
Add a photo to this gallery 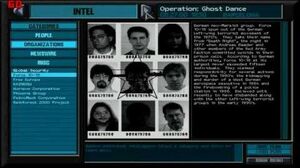