Operation Granite Cage is the sixth mission in Rainbow Six 3: Athena Sword. The custom mission version of the level is Luxury Hotel Night.

We have received intelligence that an attempt will be made on the life of the informer you rescued in Dubrovnik. He is currently being kept at the Hotel D'Erlette in Monaco for safekeeping, but the site has been compromised. Your orders are to escort the informant to safety and to neutralize the explosives that terrorists have placed in the building.

John Clark - Good work getting the gunrunner out of Dubrovnik. Now you get to keep him in one piece. He's been flown back to Monaco for safekeeping while he recuperates and is debriefed. Apparently, the hotel management felt they owed us one. Go figure. In any case, he's being kept there under constant guard.

Unfortunately, it looks like someone on the hotel staff talked about their new special guest. Hotel security got an anonymous tip, which got forwarded to us, that someone's going to try to whack our friend before can talk too much. Now, seeing as we just went through the trouble of rescuing him, I'm not inclined to let all that work go to waste. We're going back to Monaco and we're going to deploy in the hotel. Yes, I know this isn't our usual sort of operation, but to put it bluntly, we don't have a choice. Someone's put bombs in the basement.

You need to get Bagattini out of there and defuse those explosives. If you don't pull that off, everything we've done so far on this caper goes for naught.

Kevin Sweeney - You do have a talent for making people talkative when they're brought in. The hostage you rescued in Dubrovnik, his name, for what's worth, is Giovanni Bagattini, has been quite willing to turn state's evidence in this matter.

Bagattini is a freelance arms dealer with business ties to Gutierrez' playmates. He's made an arrangement to transfer the contents of the Palermo warehouse to them in Athens, and then the terrorists would use them to create an international incident on Cyprus.

The castle job in Milan was their attempt to secure the funding for the purchase. That's what we've gotten out of him so far. We're moving Baggatini back to Monaco for safekeeping and debriefing. The trick will be keeping him intact long enough to extract all of the useful information he's got.

I'm sure he's got plenty more to tell us, so keep him in one piece.

And as for his part, your old friend Gutierrez finally broke his silence, though not in a way we liked. He's sent a message, promising some kind of surprise.

That's all he said, but knowing him, it's not the sort of surprise were going to like.

You must defend the hostage you rescued in Dubrovnik from an assassination attempt. Heavily armed terrorists have infiltrated the hotel where he was being debriefed. They cannot be allowed to find and terminate our informant. Rescue Bagattini from the terrorists, and sweep the hotel from top to bottom to make sure you neutralize all of the hostiles.

MONTECARLO, MONACO (United News International) - The reputation of the troubled Hotel D'Erlette in Monaco took another blow today, but the reputation of that small country's security forces was improved dramatically. Just weeks after a hostage-taking incident in the hotel sent hundreds of guests fleeing, the D'Erlette was panicked by a phoned-in bomb threat. Local police, acting in concert with GIGN operatives, were able to evacuate the hotel and defuse the bomb, which was found in the hotel's basement. While there have been no arrests made in the case as yet, several individuals believed to be associated with the men who planted the bomb were shot and killed by the GIGN operatives after they opened fire in the hotel.

"We are well aware of the identities of those responsible for this travesty," said GIGN spokesman Pascal Bangou, "and will be making arrests shortly." Emily Turcotte, manager of the D'Erlette, had no comment. 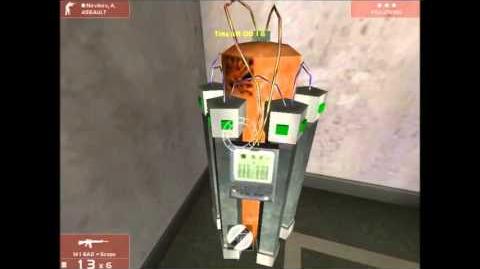