Edit
watch 02:05
Wiki Targeted (Games)
Do you like this video?
Play Sound
For the mission in Black Arrow, see Streets of Milan (Black Arrow).

Rescue all hostages
Neutralize all terrorists

Operation Hunter Storm is the second mission in Rainbow Six 3: Athena Sword. The custom mission version of the level is Streets of Milan.

The police convoy transporting the terrorists captured in Milan has been ambushed.

The hijackers have freed the captives and taken hostages in the downtown city area. Your objective is to eliminate the terrorists and secure any hostages.

John Clark - I wish there were time to congratulate you on your work at the Castello Grande, but we've got a live on here.

Apparently the terrorists in the castle operation had some friends nearby. The police convoy escorting the survivors to jail got ambushed in downtown Milan. Right now, the tactical situation is a mess. There are terrorists dug in behind barricades all through the downtown area, and they've got civilian hostages.

We'll be working closely with the Polizia di Stato Italiana again here. They're doing a good job of containing the action, but they need us to go in there and take out the perpetrators. The longer this takes, the better the chance that some of the hostiles, and that includes your friends from the castle, get away.

The situational intelligence we've gotten from the Polizia indicates that the terrorists have turned the area into a kill zone. They're using vehicles as cover, and they've gotten into buildings all through the neighborhood. That means you'll be dealing with rooftop snipers.

Your best bet will be to get up there with them as quickly as possible to make sure that team members on the ground don't get picked off. The good news is that we've got maps and blueprints of the area, courtesy of the Polizia, and you should be able to cut through the various structures to avoid ambushes.

There's no better way to take out a man behind a barricade than from behind. Get to it, people.

Kevin Sweeney - It's never simple, is it?

One of the things that troubled me about the Castello operation was why a lot of art thieves were packing top of the line military gear. The answer is, apparently, that they're not, not art thieves, that is. It makes too much sense, really, art thieves probably shouldn't have been able to take out the party's bodyguards so quickly, either.

We have been able to make a start on identifying the terrorists you took care of at the castle. They're not local, that's for certain, and at least one was traveling under an Argentine passport.

I don't like the coincidence. It reminds me of that last moment in the interrogation room with Gutierrez, just before the police took him away. I have a strong feeling he didn't tell us everything he knew.

Terrorists have made an attempt to free the prisoners taken at the Castello Grande. They have intercepted the police convoy and taken civilian hostages in the vicinity. The hostages are scattered throughout the downtown area, which the Polizia have cordoned off.

Your mission is to rescue the hostages and neutralize the terrorists.

This operation was well-organized and carefully executed, so expect the men carrying it out to be formidable opponents.

PALERMO, ITALY (United News International) - A shootout shook the streets of Milan this evening. Around 8 o'clock, a police convoy carrying suspects in the Castello Milano hostage-taking was ambushed by criminals as it passed through the downtown area on its way to Polizia headquarters. Police quickly responded and rounded up the individuals responsible. Several minor injuries were reported, but the police reported no casualties.

"The men acted quickly and bravery," said Polizia spokesman Emanuele Vezzini. "Their courage and professionalism enabled us to resolve the situation quickly and safely." 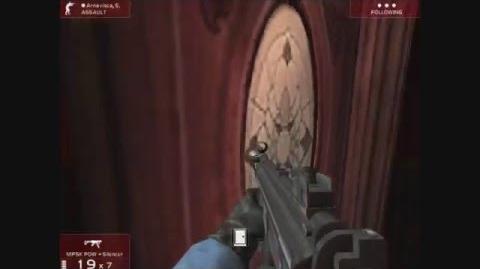