Kurdish extremists have raided ceasefire talks in Turkey and kidnapped the UN negotiator and his aide. The Turkish police have tracked the kidnappers to an open-air market in Istanbul. Your mission is to neutralize the terrorists and escort their captives to safety.

John Clark - The police can't put up a cordon without the kidnappers knowing something's up, so the target area will be crawling with civilians. These guys are experienced guerrilla fighters -- they're well armed and are accustomed to combat -- so don't expect them to roll over and play dead just because they take a few casualties. You'll need to be quick, or those hostages are dead meat. Good luck.

Kevin Sweeney - The situation is very delicate. The Kurds have been fighting the Turkish government since the 70's. Until this latest round of talks no one expected either side to accept a negotiated peace. That they're actually ready to sign a deal is due almost entirely to the efforts of Sayed Elwany, the UN negotiator who has been leading the talks. Now, with Elwany's kidnapping, the whole process is in danger of unraveling. It is absolutely essential that Elwany be rescued.

The room where the UN negotiator and his aide being held is small and easily guarded. Accessibility is limited so you'll have to cover all entrances and exits on your way in to avoid getting pinned once inside. The balcony that extends from this room overlooks the market and is a prime location for lookouts - especially snipers. And be careful in the marketplace - it's full of civilians. If the terrorists start shooting it will be very difficult to get a clean shot, and it's imperative that no bystanders be seriously injured. 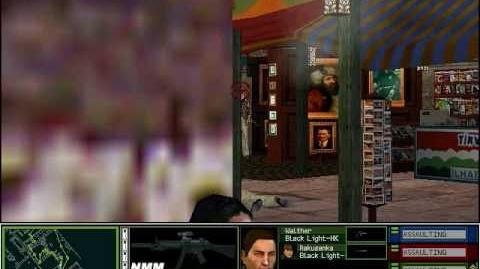