Operation Jagged Silver is the seventh mission in Rainbow Six 3: Athena Sword. The custom mission version of the level is Warehouse Night.

Terrorists are making an attempt to recover the chemical weapons seized in Palermo. They are already on site. Your mission is to prevent the detonation of any explosive devices on site, and to eliminate the terrorists.

John Clark - The timetable is accelerating, people. We've hit them, and we've hit them hard, and now they're desperate.

Specifically, they're desperate enough to try something very stupid and very dangerous.

We're stationing you inside the Palermo warehouse facility because a couple of the ringleaders Bagattini mentioned in his debriefing have been spotted in Sicily in the past week. Based on this, Intel swore up and down that the're going to make a play for the weapons stockpile again. It turns out, they were right. Intel's been doing an inventory on the stuff they found, which means that nothing's been moved off-site. That's right, every single barrel and canister is still right there.

The site's been kept sealed by the Polizia di Stato, which is providing again to be crucial in supporting our operations in Italy. However, sealed against curious locals didn't mean sealed against an armed assault, and we're going to go back them up. In other words, there are bogeys in the building already. Near as we can tell, they're trying to load up some of the nerve agent while blowing the rest to kingdom come. If they do that, the entire countryside potentially gets blanketed in chemical agents.

Kevin Sweeney - It's a good thing you were able to save Bagattini's bacon. He just dropped quite the bombshell on us. Since the terrorist's operational base is essentially wrecked, they're gambling everything on one last play. They need some sort of weapon of mass destruction if they're going to make their statement, and right now, they know where precisely one cache of those weapons might be.

That's right, they're going back to Palermo. We haven't moved the weapons from the warehouse for several reasons, not the least of which is the difficulty we've had making an accurate count. Every time we think we've got the lot, another list appears out of someone's desk drawer and we have to go searching for another gas canister hidden in the loo. It's no laughing matter, though. If a single one of these gets missed, or nicked by these fellows, we're all in hot water.

Your objective is to re-secure the warehouse in Palermo. Terrorists have assaulted the site, stealing some of the chemical weapons cache that was being inventoried. Intel believes that the terrorists are desperate, and thus will be taking dangerous chances. Their plan is to confiscate some of the WMD material in the warehouse and set explosives to detonate inside, spreading the rest over the area and causing potentially thousands of deaths. The bombs are stationed throughout the warehouse complex, and the terrorists have already triggered their timers. As a result, you are going to need to find and defuse the bombs quickly.

PALERMO, ITALY (United News International) - A dramatic shootout at a warehouse outside Palermo left at least three men dead this morning, according to police sources. The men, whom police have identified as smugglers, were attempting to trespass on a sealed police site when they were surprised by authorities.

"Several of the perpetrators did in fact reach the interior of the warehouse, where we are storing evidence for a pending case," said police lieutenant Enrico Cortelli. "We are confident, however, that these vandals and criminals were unable to liberate any of the evidence." 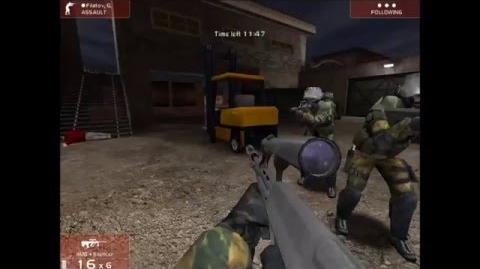