watch 03:19
Wiki Targeted (Games)
Do you like this video?
Play Sound

Operation Jasper Heart is the third mission in Rainbow Six 3: Athena Sword. The custom mission version of the level is Italian Warehouse.

Intel has determined that the terrorists are using a warehouse in Palermo, Sicily to store chemical weapons. Local police and Interpol agents have already been repulsed from the site, and some have been taken hostage.

You are to rescue the hostages and eliminate any resistance you find.

John Clark - The target this time is in Palermo, Sicily, and we're on the clock. Sweeney will give you the back story on why we're going in here, but the short version is that the tangos you took down in Milan were not operating alone. Some of them had ties to our old friend Nikola Gospic, who was responsible for all of the unpleasantness last time around. Even if he's dead and his sidekick Gutierrez is in jail, it appears some of his followers are still out there and kicking, and they've following his blueprint for action.

What we've got is a warehouse that, according to Intel, is chock full of chemical weapons. Interpol went in with local police expecting to find a run-of-the-mill smuggling operating and instead found themselves facing heavily armed opposition. There are officers down, and there are officers taken hostage, and we're going to get them out.

The complex has levels both above and below ground. Fortunately for us, Intel turned up blueprints of the site, which we'll be using to our advantage. You'll be able to assault from two directions. The first is via a large basement air shaft which vents to the outside. The second is through an old service gate in the perimeter wall. From satellite reconnaissance photos, the gate looks like it's overgrown. With luck, our targets aren't paying too much attention to it.

We have no idea how many tangos are inside, and there are some long sightlines inside the complex. That means you could be under sniper fire both along the perimeter of the plant and through the basement loading docks.

Be careful, and watch your backs. It's a maze in there.

Kevin Sweeney - Things have gotten very interesting indeed. Once the dust settled in Milan, we were able to link up with Interpol and do a little research on our art thieves. It turns out that swiping paintings and ambushing police convoys is just a sideline with them.

Of the few we've been able to identify so far, it helps with the dental records if you're not quite so good with the head shots, by and by, most have a list of convictions as long as your arm. And at least three have ties to an organization we all thought we rid of, the little cadre of neo-fascists you dealt with in Rio.

We're doing followup now, but it seems that their head man and his friend Gutierrez put sleeper cells in place all over the world before setting his plan in motion. If that's the case, we have some idea of what we're up against. And that brings us to Palermo. Interpol used some of the shipping manifests you recovered in Porto Allegre to pinpoint this site as being a hub for arms smuggling. They went in this morning with local police backup, and walked into a hornet's nest.

It looks like Gospic's people, or someone very much like them, was expecting the raid and laid an ambush. It also appears that there's more than guns in that warehouse, there's a cache of nerve agent as well. Intel suspects that it was headed for Brasil when you hit the warehouse. That doesn't make it any less deadly, however. By the way, we took another runner with Gutierrez back in Argentina. We even offered to cut his sentence if he told us where the rest of his friends are and what they're up to. He just laughed.

Either he's mad or he knows something we don't.

Your mission is to secure the warehouse Intel suspects of harboring chemical weapons, and to rescue the police officers taken hostage in the earlier attempt to search the site. The terrorists at the warehouse have the hostages under heavy guard. They are well-armed, and positioned throughout the complex. Expect heavy resistance.

PALERMO, ITALY (United News International) - Early today police raided a warehouse near Palermo, which officials suspected of being connected to the drug trade. Results of the raid were inconclusive, through witnesses reported hearing some gunshots.

"We cannot divulge the details of what was discovered in the warehouse," said Polizia di Stato spokeswoman Licia Zanoli in a prepared statement. "Suffice to say that we are very happy with the results of the operation, and will have more information shortly." 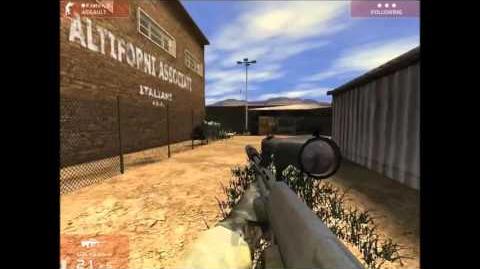