Operation Lion's Den is the third mission in the Eagle Watch expansion of Tom Clancy's Rainbow Six. The multiplayer version of the level is Big Ben.

Irish "NOMAR" terrorists have stormed the British Houses of Parliament and seized several international dignitaries. The hostages have been taken by gunpoint into the clock tower. In the terrorist's demands are not met by midnight a bomb will be detonated, killing the hostages and destroying Big Ben.

John Clark - The SAS would love to take these guys down, but Downing Street's pushing European unity this week so we got the nod instead. Make it clean and quick. If we botch this one, it'll set the Irish peace process back ten years.

Randolph Crane - NOMAR is one of the last and most vicious of the IRA splinters. They're tough, and they're professional, and they know what to expect from fellows like you. They won't make mistakes, so you can't afford to either. We've got a real chance to build a lasting peace in the British Isles and we can't let a pack of mad dogs destroy it.

NOMAR terrorists have seized dignitaries from the Houses of Parliament and are holding them hostage in the clock tower Big Ben. Police have sealed the area around the houses and many of the terrorists are guarding entrance to the tower. Take out all resistance and rescue the hostages.

LONDON, ENGLAND (United News International) - One of the United Kingdom's worst fears was realized today when an Irish terrorist group stormed the Houses of Parliament taking two visiting dignitaries hostage. After a brief exchange of gunfire the terrorists retreated to the Westminster clock tower, known popularly as Big Ben, where they were finally subdued in a hail of bullets by a police hostage rescue unit.

Authorities said the attacks was organized by the National Organization of Military Armed Resistance or NOMAR. The attackers were heavily armed and according to some reports had planted an explosive device within the clock tower that they had threatened to detonate were their demands not met. Further arrests are expected to follow. 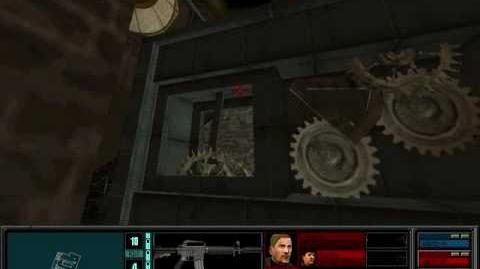