A private banking house in London has been seized by terrorists in paramilitary gear. They have taken hostages and opened fire on the Metropolitan Police. As several of the hostages are Swiss nationals, both the British and Swiss governments have requested your assistance in this matter. Your mission is to liberate the bank and any hostages within, and prevent the destruction of valuable financial records that we believe are the terrorists' target.

John Clark - Both the British and Swiss governments are asking for our help on this one. Apparently there are Swiss nationals inside the bank carrying "sensitive financial documents", but they're not willing to say more at the moment. Obviously, the Swiss government is very concerned about what happens to both their people and their papers.

The bank's four centuries old and private, which means that it's built like a fortress. We're looking at thick walls, thick doors, and good sight lines. There are two routes down to the vault, which is where we suspect the hostages are being held. Be careful of snipers on the walkway on the upper level. It's where I'd put my men, if I were trying to hold this thing.

Kevin Sweeney - We have a positive ID on the man in charge of the London bank operation. His name is Douglas Preston. He's a British army vet, decorated for service in Kuwait. He's also a major embarrassment to the British government. It seems once their war hero got home, he declared his sympathies for an organization called the Unified People's Front, which is an umbrella for every neo-fascist group in the UK. Officially, he split from the UPF six years ago. Unofficially, his politics haven't changed, and he's been connected to some illicit arms sales to paramilitary groups in Colombia. In short, he sounds like just the sort of man Gutierrez would have over for a drink.

Preston's dossier says that he's good at what he does, which means that this operation's going to be no cakewalk. His psych profile indicates that he has no problem using hostages as human shields, and his men are likely to be highly trained and well-armed. He's a bit of a perfectionist, very cautious, so don't wait for his squad to make mistake. They won't.

Your mission is to liberate the bank and any hostages within, and prevent the destruction of valuable financial records that we believe are the terrorists' target. Reports from the local police describe these guys as very well armed and simply waiting for someone to intervene. Before entering the building, you should neutralize the security camera operator located on the first floor to the right of the main entrance. Once inside, your first objective is to prevent the destruction of financial records in the file storage library situated on the second floor. According to the blueprints, there are two ways of getting down to the underground vault where the hostages are: a stairway behind the teller's booth and a back stairway in the director's office.

LONDON, ENGLAND (United News International) - Downtown London was thrown into turmoil today after a robbery at a venerable banking institution turned deadly. What looked to be a simple attempt to break into the bank's safe turned into a hostage situation, with the Metropolitan police arriving in time to prevent the robbers' escape. However, the job of digging the hostage-takers out fell once again to the SAS, who were equal the task. Several casualties were reported in the affair, including a pair of police officers wounded when the thieves first opened fire.

The Prime Minister himself offered congratulations to the SAS members and expressed his deep condolences for the families of those killed by the gunmen. Joining the Prime Minister in those sentiments was the Chief Ambassador from Switzerland, Georg Werner, who expressed his country's gratitude for the "speedy and efficient action" of the SAS.

Several Swiss banking officials were inside the bank when the robbery started, though none were hurt in the resultant gunplay.

RAINBOW are preparing to breach the London's Private Bank 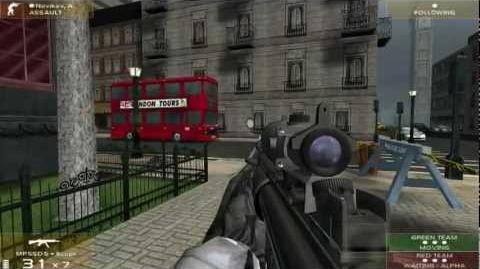