Operation Little Wing is the first mission in Tom Clancy's Rainbow Six: Eagle Watch. The multiplayer version of the level is Space Shuttle.

It was later added to Tom Clancy's Rainbow Six 3: Raven Shield as a custom mission in the Iron Wrath expansion.

Militant terrorists "BOTHRA" have seized control of the Russian space shuttle Buran on its launch pad. An international crew has been taken hostage, and the terrorists are threatening to kill them, as well as destroy the shuttle's valuable payload. Your mission is to neutralize all terrorists and safely free the hostages.

John Clark - Apparently the tangos got into the launch pad disguised as workers. Israeli and Japanese satellites are in the payload bay and some of the crew is being held hostage. There's the potential here for a major international incident. Take your time and watch your backs.

Gabe Daniels - I'm glad to try to help you people out, but this is a tough situation. There's only one way into the shuttle from the pad and that's by way of an entrance ramp. If they're holding our guys on the flight deck you're going to have a heck of a time getting in there.

Militant terrorists have taken the Shuttle Buran site and are holding a scientist and two workers hostage. They are being held in the cockpit of the shuttle, along with a bomb. You will need to enter by way of the Launch Pad. Find the hostages and neutralize all terrorists at the site.

Due to the height of the tower, we are unable to provide you with outside heartbeat sensor support. You may want to consider taking a portable unit along with you.

REPUBLIC OF KAZAKHSTAN (United News International) - A group of terrorists seized control of the Russian space shuttle this morning and held a number of scientists and cosmonauts hostage until the launch pad was stormed by government security forces later in the day. The group, calling itself the Brotherhood of the Higher Realm Army or BOTHRA, has previously attacked government installations in Pakistan, but this is the first time they have struck outside of that country.

A spokesman for the Russian government revealed that despite heavy gunfire on the launch pad, the assault team had regained control of the facility with minimal losses. All personnel were evacuated from the area by sunset and investigators are now trying to determine how the terrorists passed undetected through site security. 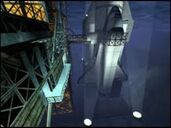