Start a Wiki
watch 01:53
The Loop (Games)
Do you like this video?
For the original version of the mission, see Operation Lone Fox (Rainbow Six).

Infinario's computer files reveal that the Phoenix Group has targeted the closing ceremonies of the London games for the virus release. The security provided for the games by Global Security has been compromised at the highest level.

James Danko - Another job well done, Alpha Team. But the pace of events is accelerating now and we have to accelerate with them. We decrypted the data you brought from Infinario's server. The Phoenix group is planning to release the Brahma pathogen at the closing ceremonies of the Games in London. You'll recall that GSS is doing security for the Games. Based on our experiences at Infinario headquarters, that doesn't look good for us.

Dr. Winston - Releasing the virus during closing ceremonies means they will be able to infect an entire stadium full of people... most of them scheduled to board international flights within twelve hours of exposure. By the time the first symptoms manifest themselves a week later, Brahma will have spread to every corner of the planet. Efficient, brilliant... And monstrous.

Control - The question is whether the incident in San Francisco will push Phoenix to release the virus ahead of schedule. In that case, we can quarantine London in order to prevent the virus from spreading. But our intel is telling us that scenario is unlikely. We believe they'll stick to their original operational planning.

James Danko - What we DON'T know right now is: one, how exactly the virus will be released, and two, who inside GSS has been compromised. What we know for sure is GSS President and CEO William Hendrickson will depart London for a private airport tomorrow morning. Which means he'll miss the closing ceremonies. You'll be working with SAS on this mission. They'll set up a roadblock on the way to the airport to intercept Hendrickson's motorcade. Bravo Team will cut off all potential escape routes. You will extract Hendrickson so that we can interrogate him. Do NOT use deadly force on him. We need him alive. 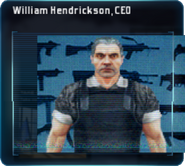 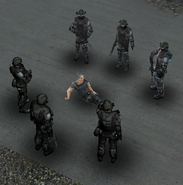