Operation Lucky Snare is the first mission in Tom Clancy's Rainbow Six: Covert Ops Essentials. The multiplayer version of the level is Jungle.

A small private plane belonging to the ranking military commander of Bolivia suffered mechanical trouble and was forced to land in the jungles of upper Bolivia. General Sixto and his household staff survived the landing, but have taken prisoner by a group of rebel insurgents camped nearby.

John Clark - Sometimes the bad guys just get lucky. The EGTK is a fringe group of anti-government terrorists who have been a marginal threat for years, living among the native ruins in the jungle. Then their biggest enemy drops right into their laps.

Normally, of course, this would be an internal Bolivian matter. But the Bolivian President is a little curious why Sixto took an unscheduled flight towards Columbia with a million dollars in hard currency, his entire household, plus several crates of advanced weaponry. Let's get the General back for a few questions.

Kevin Sweeney - The EGTK is an underfunded, underwhelming group of regional terrorists. But given the density of the terrain and their lucky lucky weapons cache, this will be a difficult mission. Due to the threat of man-portable anti-air, we'll have to set you down several kilometers away and have you insert on foot. Satellite scans of the region show a deep gorge between your insertion site and the downed plane. That jungle will teeming with guerillas in no time flat, so get in, get General Sixto, and get out quick.

There are two ways across the gorge: a weak rope bridge, and a passage by the waterfall. Suppressive fire is a must when attempting to cross the open bridge. 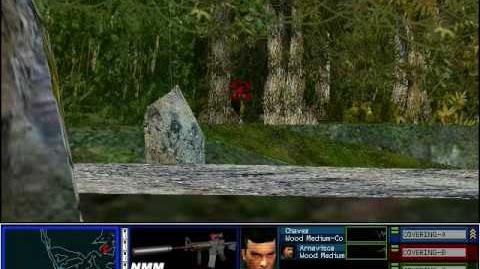