Edit
watch 04:03
Wiki Targeted (Games)
Do you like this video?
Play Sound
Not to be confused with Siberian Base.

Operation Majestic Gold is the fourteenth mission in Tom Clancy's Rainbow Six: Rogue Spear. The multiplayer version of the map is Siberian Base II.

Communication between the base and the outside world has been cut. Your final objective is to enter the main complex, and use explosive charges to destroy the core of the bomb manufacturing facility. None of Kutkin's men must be allowed to leave the base.

John Clark - You're almost home free. The primary target is the machine shop used to fashion the nuclear core. The secondary target is the base generator. Expect some serious opposition - a lot of the guards are ex-military, and they're well armed. And remember - try to minimize casualties among the base scientists.

You might also be interested to learn that Dr. Holt has some information about our anonymous informant.

Susan Holt - We now believe that the man who has been feeding us information about Vezirzade and Kutkin is none other than Lukyan Barsukov - the "Russian Godfather" himself. Apparently he's had his suspicious about his son-in-law for years, but he needed us to dig up the dirt. While you've been hanging out north of the Arctic Circle, Moscow and St. Petersburg have been caught in the middle of a full-scale gang war. Dozens of people on both sides are already dead.

We'll need Barsukov's input if we're going to find Kutkin. I'm going to see if I can contact him directly. Wish me luck.

Your mission is to destroy both the base's precision machine shop and its electrical generator, effectively putting Kutkin out of the bomb-making business. Any member of your team can set the demolitions charges - the locations of both targets are clearly marked on your map.

Note that this is the second stage of a two-stage mission. Be aware that you will be limited to operatives you took on the prior mission. 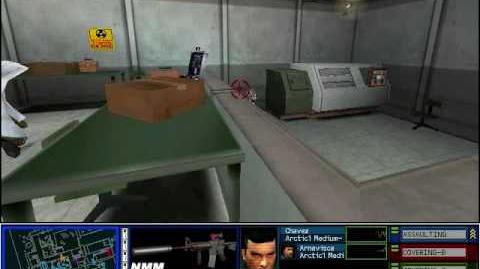