View source
watch 04:03
Wiki Targeted (Games)
Do you like this video?
Play Sound
For the remake of the missions, see Operation Mystic Tiger (Shadow Vanguard).

John Brightling and the last remnants of the Phoenix Group have barricaded themselves in the Horizon Ark in Brazil. Your mission is to take control of the Ark, neutralizing any of the occupants who offer resistance and rescuing those who are willing to surrender.

John Clark - Into the lion's den. Brightling's in there, hiding deep in some bunker. There's no telling what he might do if we try to wait him out -- kill himself, kill his followers, make an attempt to expose the Brazilian troops to the virus. The decision's come down -- we're ending this now. Good luck, and Godspeed.

Catherine Winston - According to the Horizon records, the only remaining cultures of the virus are stored at the Ark. They must be destroyed. We've got a full biohazard team standing by waiting to go through the whole complex with a fine-toothed comb once you give the all clear.

I still can't believe John Brightling is behind all this. One of the reasons I went to work for Horizon was that it seemed so much more humane than other corporations. I never imagined my research would be twisted into something so horrible.

John Brightling and the remnants of the Phoenix/Horizon conspiracy have barricaded themselves in the Horizon Ark. The Ark consists of three habitat domes and an inner survival bunker where Brightling is believed to be hiding. Brazilian troops have surrounded the compound, but RAINBOW has been asked to lead the assault.

Some of the Ark's occupants may be willing to surrender peacefully. Avoid unnecessary bloodshed, but keep in mind that the safety of the team and the capture of John Brightling take priority.

There is a possibility that the Brahma virus has been released within the Ark. The use of biosuits is highly recommended for this mission. 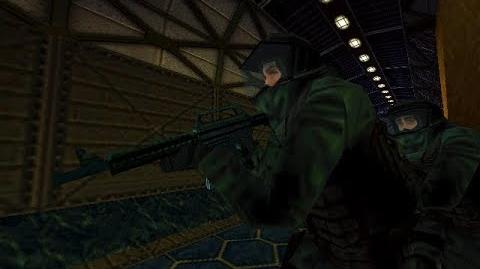