Edit
watch 02:30
Dead Cells Final DLC - The Loop
Do you like this video?
Play Sound

Operation Omega Shadow is the fourth mission in Rainbow Six 3: Athena Sword. The custom mission version of the level is Luxury Hotel.

The owner of the warehouse in Palermo has been located in Monaco, where he resisted arrest violently. His bodyguards have taken hostages from the security personnel at the Hotel D'Erlette. Your task is to rescue those hostages and bring the fugitive in alive.

John Clark - We're off to Monaco, ladies and gentlemen, but I'm afraid this one's business, not pleasure.

Intel tracked the owner of the warehouse in Palermo to a hotel suite in Monaco, and fed all the info to the local gendarmes. They tried to make an arrest, but apparently the man's got some well-armed and bad-tempered bodyguards. They opened fire on the police, and took a handful of hostages, and now the government's screaming holy hell about what this is doing to the tourist business.

I don't much care about tourism, but I do care about nailing the guy who ran that chemical weapons operation out of Sicily. That means that you get to go in there and dig him out, along with the tourists his friends have taken hostage. Feel free to take down his bodyguards, but take them seriously. Local police are reporting that at least a few of them have gas masks, so gas grenades may not be an option. The hired thugs are secondary, though.

We need the man himself alive. Intel's itching to get their hands on him to find out what he knows, and if someone gets overzealous, they're going to be very disappointed.

There's going to be a lot of rooms to clear up and down those hotel corridors, so flashbangs are going to be your best friend on this one. Make sure you get off those hallways as quickly as you can. You don't want some clown popping out of the stairwell at the end of the floor while you're not looking.

I'll see you when you're done, people.

Kevin Sweeney - I have here in my hand the inventory lists from that warehouse in Palermo, as well as site reports and other pertinent documents, and all I can say is "thank you."

It looks like there's enough banned substances in there, nerve agents, mostly, with a few others tossed in for good measure, to wipe out a small country. Furthermore, whoever was responsible for their storage was not doing his job. At least three of those barrels are very close to some rather nasty leakage problems.

Gutierrez and his cronies seem to have had more in the tank than we though. But that's neither here nor there. What we've got is conclusive evidence tying this site to Gospic's operation in South America, and to the terrorists you dealt with in Milan.

Now it's time to start winding up the string. And we start with the owner of that warehouse, a man named Riccardo Miccini. It's no surprise that Miccini wasn't home when the local police came calling. Instead, he was in Monaco, holed up in one of those luxury palaces along the waterfront. When the police there asked him to come along quietly, his bodyguards started shooting. Now, we have clear evidence he's linked to Gospic, Gutierrez and the chemical weapons smuggling, but he's not the end of the chain. We want to know whom Miccini's working with, and for that, we need him alive. Once you bring him in, we can start squeezing him.

Your objective is a man named Riccardo Miccini, who owns and operates the warehouse you seized in Palermo. He and his bodyguards have exchanged fire with police in a luxury hotel, and have taken hostages as well. There are relatively few hostiles in the hotel, but they are well-trained and well-armed. Miccini is on the highest accessible floor of the hotel, and you will need to eliminate all of his bodyguards in order to capture him. We don't know where the hostages are being kept, so you're going to have to search the site from top to bottom in order to find them.

MONTECARLO, MONACO (United News International) - A disturbance at the Hotel D'Erlette in Monaco was resolved today by local police forces, who arrived in response to a request for help from hotel security. Several guests were briefly caught in the crossfire when several individuals, believed to be private security staff, drew their weapons and began firing. Authorities are withholding the names of those involved.

"It was a nightmare," said Oliver Turcot, an executive from Lyon who was staying at the exclusive resort. "I come here for vacation and instead I end up with people shooting."

A spokesman for the hotel promised that the D'Erlette would in fact stay open for business while the damage is repaired, and noted that stronger security meansures would be taken in the future. 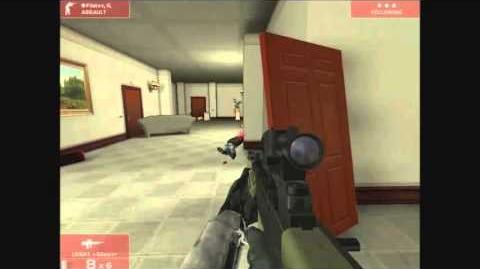