Operation Oracle Stone is the eleventh mission in Tom Clancy's Rainbow Six: Rogue Spear. The multiplayer version of the level is Casino (Winter)

Intelligence gathered from the raid on Vezirzade's dacha has revealed that Kutkin is assembling nuclear weapons at an unknown location in Siberia. Your mission is to infiltrate Kutkin's Private spa "Elnya", plant surveillance devices, and escape without being detected.

John Clark - Those files you pulled out of Vezirzade's computer have given us a much cleaner picture of what's going on. Kutkin has set up an operation somewhere in Siberia to turn the raw plutonium into working bombs. We need to know where it's located so we can go in and shut it down.

Kutkin's spa is in the countryside near Smolensk. He and his cronies snapped it up cheap during the break-up of the Soviet Union and have turned it into their own private resort. It's not particularly well guarded, but Kutkin has a number of houseguests at the moment so it may be tough getting in and out without being seen.

This is a pure recon mission. USE OF DEADLY FORCE IS NOT SANCTIONED ON THIS OPERATION. Your mission is to plant a bug and a surveillance camera in strategic locations within the house - both locations are clearly marked on your map. Any of your operatives can plant the devices, but be aware that if any of Kutkin's guards or guests detects your presence your mission will be a failure. 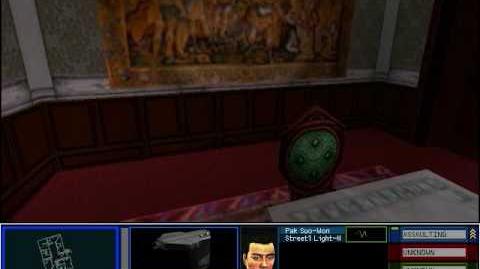