Operation Pandora Trigger is the first mission in Tom Clancy's Rainbow Six: Rogue Spear. The multiplayer version of the map is The Met.

A group of Egyptian extremists "Islamic Vanguard" have stormed the Museum of Art in New York City during the opening festivities of a new exhibition of Egyptian antiquities. Your mission is to retake the building with minimal loss of life.

John Clark - Looks like we've got some new team members. Welcome aboard, ladies and gentlemen, but try to save the introductions for later - we've got work to do.

Normally the Feds handle hostage situations on American soil, but apparently we've got some very high-profile foreign nationals in there - among others, the French prime minister's daughter. As a result, Paris and Brussels have both insisted that RAINBOW run the extraction instead. Washington's not arguing - they just want those folks out.

One more thing: try to keep the collateral damage to a minimum. This is a museum, after all, not a shooting gallery.

NYPD has established a secure perimeter and set up heartbeat surveillance so you'll be able to track the positions of the hostiles once you're inside. There are two ways in - the main door and a secondary entrance in the rear. According to the blueprints there are a lot of balconies in the main exhibit halls, so watch out for snipers.

NEW YORK, UNITED STATES of America (United News International) - Elite U.S. government troops stormed the Metropolitan Museum of Art, killing all members of an Islamic terrorist group who had occupied the building for more than 30 hours. According to NYPD spokespeople, all hostages were released safe, but shaken.

The group, calling itself the Islamic Vanguard, apparently entered the Met dresses as employees of a catering company before revealing weapons and securing several hostages. The Vanguard demanded the releases of several prisoners in the U.S. and Egypt, as well as the return of several antiquities to Egyptian soil. The attack interrupted a gala black tie affair attended by many world dignitaries, including the daughter of the French Prime Minister and many others.

Museum officials have begun assessing the extent of harm to the collection. The terrorists covered many works considered offensive to Islam, but did not deface any. Damage done during the assault is far worse. "I can cope with sun bleaching and pollution," one restoration expert said, "but how do I repair a bullet hole?" 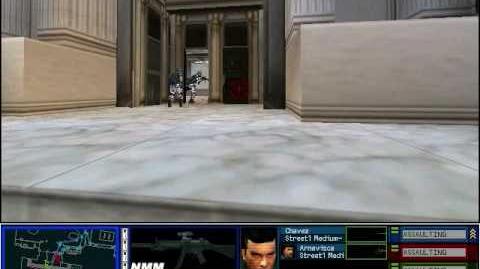 Attacker at the Museum of Art in New York City

Attacker at the Museum of Art in New York City
Add a photo to this gallery
Retrieved from "https://rainbowsix.fandom.com/wiki/Operation_Pandora_Trigger?oldid=64211"
Community content is available under CC-BY-SA unless otherwise noted.