watch 03:03
The Loop (Games)
Do you like this video?
Not to be confused with the mission in Tom Clancy's Rainbow Six 3 (Console), Island Estate.

Narco-terrorists have taken members of the Royal Cayman Islands Police Force hostage at a private estate on Cayman Brac. The Governor's Office requests your assistance in resolving the situation. Your mission is to secure the estate and liberate the captive officers.

John Clark - It looks like hostage-taking is the latest fad on Cayman Brac. What we're looking at is that island estate of a man named Nikola Gospic, whom the local police wanted to ask some questions about the run-in at the airport. It was routine stuff, just "Did you see anything?", but they got a non-routine response. Gospic wasn't at home, but somebody else was. When they saw the police they panicked and opened fire. The officers who weren't hit in the first exchange fell back and radioed in for back-up, but two men are already down and a couple more were taken hostage by whoever's in the house.

Since we were still in the vicinity, the Governor specifically requested that we help resolve this situation. Fortunately, Gospic likes his privacy, because the estate is walled and out in the middle of nowhere.

Kevin Sweeney - The estate you'll be liberating belongs to a man named Nikola Gospic, one of the most well-liked men on Cayman Brac. Gospic is in his 80s and is something of a philanthropist. He's also got extensive busimess interests throughout Argentina and Brazil, and according to Intel he's currently in Buenos Aires tending to some of them. He picked a smart time to be out of the house.

We can safely assume that the men holed up on Gospic's estate are tied to the narco-terrorists you took down at the airstrip. The bullets the local ballistics experts dug out of their police cars match the ones the airport terrorists were using. Furthermore, the Cayman authorities have a positive ID on two of the shooters at the house. They're small-time drug runners who'd been overheard bragging about a big score they were about to make.

Your mission is to secure the estate and liberate the captive officers. The hostages are located on opposite sides on the mansion. One of the police officers is in the master bathroom, while the others is in the guesthouse. Getting these hostages out shouldn't be a problem, but getting to them will be tricky.

CAYMAN ISLANDS (United News International) - Police resolved a second hostage crisis today on the island of Cayman Brac, at the estate of a local philanthropist. The crisis, which began earlier in the day when gunmen in the house opened fire on police, was brought to a successful conclusion when police rushed the house, subduing the men inside. The gunmen, allegedly members of a drug smuggling ring, may be connected to the narco-terrorists responsible for the incident at the island's airport yesterday afternoon. According to sources in the Cayman Islands, the owner of the estate is currently out of the country. A statement released by his lawyer expresses deep regret at the incident and indicates that the gunmen in the house were there without his knowledge or permission. 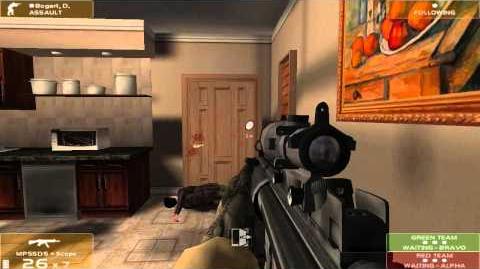 Add a photo to this gallery
Retrieved from "https://rainbowsix.fandom.com/wiki/Operation_Pearl_Castle?oldid=64648"
Community content is available under CC-BY-SA unless otherwise noted.