Operation Perfect Sword is the fifth mission in the Tom Clancy's Rainbow Six: Rogue Spear. The multiplayer version of the level is 747.

Three days ago middle-eastern terrorists gained control of an Aolian Airlines airliner. The airplane is now stranded without fuel at Brussels Airport. Several hostages have already been executed. Your mission is to retake the airliner before further killings occur.

John Clark - Samed Vezirzade. Remember that name. He's a major player in the "Oil Mafia" in Azerbaijan. Very rich, very powerful, very anti-western. We've tied him to the attack at the Met, the nerve gas release in Oman and now, this airplane hijacking. He's not even bothering to cover his tracks. He knows that with the current political chaos in Azerbaijan there's no way we can touch him through normal channels - the "Oil Mafia" controls more territory than the Azeri government does.

As for this current situation - in exactly one hour the authorities at the Brussels Airport will send out tanker trucks to refuel the jet. That will be our window to strike. Follow the trucks across the tarmac and take out the bad guys.

Susan Holt - Vezirzade's motives are unclear. He's obviously not helping his oil business by backing operations like this. It looks as though what we have here is an idealist - he's launched his own private war against the west, and he's funding it entirely out of his own people.

Getting to the plane without being seen will be your biggest challenge. Be ready to use the fuel truck to cover your approach. The terrorist guarding the plane's main door is using one hostage as a human shield, while the rest of the passengers are being held in the main cabin. You may be able to get on board through the rear cargo door, but watch for guards patrolling the cargo bays.

BRUSSELS, BELGIUM (United News International) - Belgian authorities, in a daring daylight raid, succeeded in freeing hostages from a terrorist-held jumbo jet. The Aolian Airlines plane was hijacked two days ago en route to London with a passenger list full of returning British tourists. The jet landed initially in Frankfurt where the gunmen killed two passengers and one member of the flight crew before authorities allowed the plane to proceed to Brussels. The police assault in Brussels came while the jet was being refueled for a longer trip to an unannounced destination.

The attack is believed to be the work of the Islamic Vanguard, the middle-eastern terror group also linked to the attack on the Metropolitan Museum of Art in New York City earlier this year. "We may be entering a new era in the war against terrorism," said Oliver Garamfalvi, a spokesman for the Belgian government. "These groups interested only in creating an atmosphere of fear in the democratic nations."

Police and army specialists the world over praised the Belgian team on its success. "Storming an airplane in the middle of a runway is one of the toughest tests a counterterrosist team can face," claimed one analyst. "The success of the operation is a testimony to the effectiveness and skill of the Belgian team and its leaders." 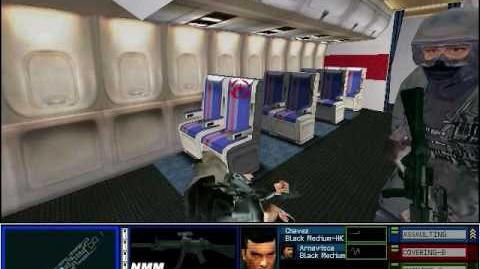 Islam Vanguard plane hijacker
Add a photo to this gallery
Retrieved from "https://rainbowsix.fandom.com/wiki/Operation_Perfect_Sword?oldid=64120"
Community content is available under CC-BY-SA unless otherwise noted.