View source
watch 04:03
Wiki Targeted (Games)
Do you like this video?
Play Sound

Operation Red Wolf is the ninth mission in Tom Clancy's Rainbow Six. The multiplayer version of the level is Mint.

After the controversy surrounding the previous mission, the United States government prohibits RAINBOW operations on their soil indefinitely, despite RAINBOW's success in the mission. As a result, RAINBOW can only perform missions in Europe, South America, and Australia until further notice. Meanwhile, the terrorist organization Free Europe has struck again, this time on a Belgian bank that was preparing to celebrate the adoption of the Euro as the national currency, which is the primary motive for Free Europe's assault and subsequent takeover of the bank. They have also taken hostages with them. RAINBOW's mission is to rescue the hostages from the bank.

John Clark - This is another Global Security screw-up. They're spread too thin. They've got all their best people in Sydney for the opening ceremonies of the summer games and they're neglecting the rest of their operation. Glorified rent-a-cops. The U.S. government's not happy about Idaho. Pending an official inquiry, our sphere of operations is restricted to Europe and the Commonwealth. The only thing that saved us out there was quick thinking on your part. Good work. Dr. Winston's in our lab at Hereford, analyzing the virus samples you recovered. We've got a lot of unanswered questions: What is Phoenix's target? Where did they get the virus in the first place? WHo put up the funding to build that lab complex? Who tipped them off that we were coming? We need answers, and fast.

Catherine Winston - I've run some preliminary tests on the samples you brought back from Idaho. The results aren't good. It resembles Ebola Brahma, the filovirus I was studying in Africa, but somehow it's managed to jump the species boundary and attack humans. You saw what it did to those poor people they were testing it on. Within a week of exposure you'll get a fever and convulsions, followed by rapid necrosis of all the major organs: brain, lungs, liver, stomach. We call it crashing and bleeding out - it's a horrible way to go. If this bug gets into the general population it'll be like the Black Death on a global scale - a pandemic, hundreds of millions dead. This isn't a virus - it's a doomsday device. I'm sequencing now. Once I get the results back I may be able to figure out how Phoenix managed to get hold of an agent like this.

The map is a large bank that also has several money presses for the newly instated Euro. It consists of a large lobby in the front guarded by several terrorists, and a loading bay to the side for more covert entry. Apart from the many halls and offices that do not have terrorists, the room where the hostages are being held, the main lobby, the money presses (and the catwalks above them.), and the loading area will all have guards. Unlike the Free Europe terrorists in the first mission, all of the guards are armed with AK47s, making them tougher.

There are three hostages on all difficulties that need to be rescued. Terrorists will be guarding every path to the hostages, but the easiest way to rescue them is to go through the bank via the storage area, kill terrorists in the loading bay and the press, go upstairs into the room where the hostages are being held, and escorting them back the way they came. The main lobby can be totally avoided this way, and about 4 or 5 terrorists only need to be killed, no matter the difficulty. The player can also neutralize all terrorists, immediately rescuing the hostages. Should the mission be completed successfully, an image of Genedy Filatov escorting the hostages in the bank will appear. If the mission is failed, however, an image of Karl Haider will appear, and he will be dead in the front of the bank.

Members of a British neo-Nazi terrorist organization have seized control of the central European mint during a celebration honoring the first production run of the new European currency. Several dignitaries are being held hostage in the mint's vault.

Belgian authorities have cordoned off the area. You will be inserted near the mint's main gate. Return to this location when you have freed the hostages.

Despite being better armed than they were in the first mission, Free Europe terrorists still have about the same amount of armor, making them easy to kill. One can easily sneak through the side of the bank to rescue the hostages, avoiding the lobby altogether. There are about 3-5 terrorists in the main lobby, 1 in the loading bay, 4 in the press (On both ground and catwalk), and 1-2 terrorists guarding the 3 hostages (Varying numbers depend on difficulty.) This level has been reported to have either been easy or frustrating, since one can do this mission with just 1 operative, kill 4 or 5 terrorists, and slip out with the hostages, or and entire team of 8 can be ambushed or sniped from the 2nd level.

BRUSSELS, BELGIUM (United News International) - Belgian police stormed the Central European Mint Wednesday, bringing to an abrupt conclusion the stalemate that had existed since members of the Free Europe organization seized control of the building Saturday night. Officers with Belgium's elite counter-terrorist force, the Escadron Special d'Intervention (ESI), struck shortly after 3:00 local time, taking the building's defenders completely by surprise. After a few brief minutes of gunfire, members of the ESI team emerged from the compound leading a band of weary hostages dressed in rumpled eveningwear. According to a police spokesman, all of the terrorists were killed in the assault.

Free Europe took over the building during a reception honoring the first production run of the new European Union currency. The same Free Europe group was responsible for a hostage situation at the Belgian embassy in London last spring, which also ended in a violent hail of bullets. Police speculate that this recent victory by the authorities may have broken the back of the organization.

A spokesman for Global Security, which had provided security for the party on Saturday, declined comment. 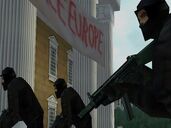