Disarm the bomb
Rescue the tourists

Operation Sapphire Rising is the second mission in Tom Clancy's Rainbow Six: Eagle Watch. The multiplayer version of the level is Taj Mahal.

A radical Indian separatist group "Sikh" has seized tourists visiting the Taj Mahal. The terrorists are demanding the formation of an autonomous Sikh state within India or all hostages will be killed. Reports indicate that they have planted a bomb within the historic building. Your orders are to find and secure all hostages and prevent the bomb from being detonated.

John Clark - Intelligence indicates that the group holding the Taj are Sikh. This attack is probably retaliation for the Indian government's assault on the Golden Temple in '84. Remember that the Taj is a national monument as well as an art treasure, so try to keep the collateral damage to a minimum.

Akbar Jahan - The level of violence is particularly high in India right now. The Sikhs have been fighting the Army since the 1980's and lately the battle has been going against them. This latest attack is clearly a desperation measure. Not that that's any consolation to the poor devils with the guns pointed at them...

Sikh terrorists have planted a bomb in Taj Mahal. They also have four hostages being held on the second floor. Find the bomb and disarm it, and release the hostages without any of them being killed.

You will be inserted on the roof of the structure. Meet back on the roof with the hostages at the extraction point.

We have set up heartbeat sensors around the Taj Majal, so you should have full information on terrorist locations once you've inserted.

AGRA, INDIA (United News International) - A terrorist attack on the Taj Mahal by Sikh separatists has been thwarted, Indian officials report. According to a spokesman for the Indian government, the separatist group stormed the landmark building around 3 o'clock yesterday afternoon, taking both terrorists and guides hostage. A bomb was also planted in the Taj in an attempt to discourage police action.

The crisis was brought to a quick conclusion through swift action by Indian security forces. Before the terrorists had a chance to consolidate their position, the building had already been stormed. Casualties among the hostages appear to be light and experts are already combing the historic building to assess the extent of the damage caused by the brief battle between the police and the terrorists.

The attack was the latest in what has been called an all out war on the Indian government by Sikh organizations. 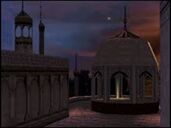