Operation Sargasso Fade is the thirteenth mission in Tom Clancy's Rainbow Six: Rogue Spear. The multiplayer version of the level is Siberian Base I.

Intelligence gathered from Kutkin's spa has located his nuclear weapon production facility in an abandoned radar base near the Siberian town of Svetlogorsk. Your mission is to raid the base and shut down its operation.

John Clark - We'll run this operation in several stages. The first step in the plan is to sever all communication between the base and the outside world. This carefully about who and what you're taking along on this one. Once you're on the ground in Siberia you'll be on your own. There won't be time to send in any back-up.

The communications facility is on a hill overlooking the main base. Be sure you don't alert the main base of your presence. You'll deal with them soon enough.

Kutkin has a whole team of ex-Soviet scientists working for him - willingly or not, we don't know. Try to keep as many of them alive as possible - we'll want to question them later.

Anonymous informant- Mr. Clark, I pray there is still time to stop Vezirzade's monstrous undertaking. If I had acted sooner this never would have happened. I am to blame for this - just as much as Maxim or that pitiful colonel. I am a man of responsibilities, and I have let others shoulder my burden for too long. Before it is too late... I must set things right. I will see to it myself.

Your goal is to disable the communications center, cutting off the base from the outside world. Any member of your team can set the demolitions charge - the location where it should be placed is clearly marked on your map. The Russian guards are in the radio contact with each other, so you'll need to take them out quickly before they can raise the alarm.

Note that this is the first stage of two-stage mission. Be aware that you will not have the opportunity to assign new operatives between stages. 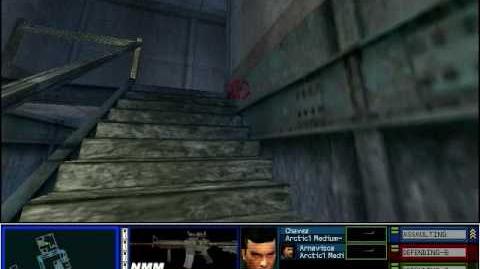