Edit
watch 04:03
Wiki Targeted (Games)
Do you like this video?
Play Sound
Not to be confused with the mission from Rainbow Six 3 (Console), Penthouse (Rainbow Six 3).

Operation Shattered Glass is the ninth mission in Tom Clancy's Rainbow Six 3: Raven Shield. The custom mission version of the level is Penthouse.

RAINBOW has been authorized to plant audio surveillance devices in the penthouse of Alvaro Gutierrez, an extremist Argentine politician. Gutierrez has been linked to both the incidents in Switzerland and Nikola Gospic, the owner of the Cayman estate and the meat packing firm. Your mission is to plant bugs in the computer and one of two phones in Gutierrez' apartment.

John Clark - Ladies and gentlemen, it is time to start closing the net on an Argentine politician named Alvaro Gutierrez.

We've got circumstantial evidence that Gutierrez is linked to Gospic. I want to get something concrete and find out what those two are up to. So far, all we've got is that it's big, it's dangerous, and we can't see it all.

That's why you're going to bug Gutierrez's penthouse. I want to know who he's talking to, what he's saying and when he's saying it. Hell, I even want to know if he snores. He's cagey, though, so while you're upstairs, the local cops are going to be downstairs tearing his offices apart. It doesn't really matter if they find anything. They'll keep Gutierrez busy enough that you should have a relatively clear run through the penthouse.

Kevin Sweeney - Our people sat down with Mr. Gospic for a little chat and he seems nice enough. He arrived in the Caymans back in the 1940's, already wealthy, and claims to have been lucky in business ever since. I think we got ten apologies for the incident at his estate, which he called "a terrible accident," and he's promised to hire more security so that it never happens again. Right now we've got nothing on him, except that some of his companies are mixed up in a very bad business. Indeed, he seemed extremely upset over that whole records mess in Pilar. Nothing links him directly to trouble, though.

Gutierrez is a different story. For one thing, the terrorist who survived the Swiss highway firefight gave us his name during questioning. For another, several of his bodyguards were former People's Social Nationalist thugs, at least before he put them in tuxedos to watch his back. Make no mistake, though. They're still thugs. If Gutierrez wins that election, things could get very ugly indeed.

Your mission is to plant bugs in the computer and one of two phones in Gutierrez's apartment. Since this is a reconnaissance mission, use of deadly force is NOT sanctioned. If Gutierrez's guards find you in the apartment, the mission is over. Some of the guards are busy watching the raid downstairs, while others seem to be watching a football game. However, a few dedicated souls are at their posts and may pose a problem.

BUENOS AIRES, ARGENTINA (United News International) - Last night police raided the political offices of presidential candidate Alvaro Gutierrez. After an extensive search, police came up empty-handed. Police spokesman Eric Sanchez said, "We are very surprised with the outcome of this raid as our information came from an extremely reliable source. We apologize for any inconvenience we may have caused candidate Gutierrez."

An official statement for the Gutierrez campaign read, "We have no idea why the police decided to search our offices, but we cooperated with all of their demands. We are very happy that this unpleasant situation is behind us and look forward to getting back to making Alvaro Gutierrez the next President of Argentina." 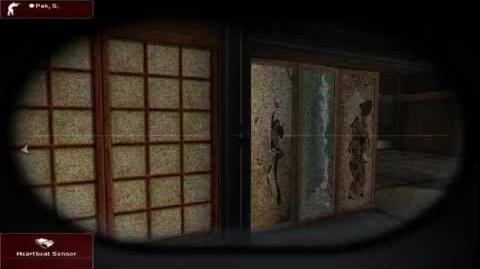