Operation Silent Ace is the second mission in the Black Thorn expansion of Tom Clancy's Rainbow Six: Rogue Spear. The multiplayer version of the level is Cruise Ship.

An unknown terrorist group has seized an Italian cruise ship anchored near Tunis, Tunisia. High explosives have been detected on board, and two passengers have been taken hostage. A night assault is Rainbow's only chance to safely extricate the hostages. Your mission is to disarm the bomb and liberate the captives.

John Clark - The Rei di Tutto is a 100-meter luxury cruise ship designed for an elite clientele. We've located two bombs aboard the ship. Both have been placed on the third deck, with one in the ship's casino and the other in the bar at the other end of the vessel. They're both well guarded. The hostages seem to be held somewhere below the main decks of the ship. Get in, disable the bombs, and then get those hostages out alive. The terrorists have started posting their ransom demands for each passenger, and if we don't wrap this up quickly, matters could get extremely complicated.

Kevin Sweeney - With the information we've got, the resemblance between a 1985 cruise ship attack and the one we're looking at now is too close to ignore. We still don't know who these guys are or what they want, but they're well organised and well equipped, and they seem to have done their homework on how to tackle a ship like this one. Tangos are holding hostages on this ship, and threaten to blow it up if their demands are not met. It is up to you to save the hostages and the ship.

The assault team will infiltrate the harbor next to the cruise ship under cover of darkness. The liner has three entry ramps, which can then be used for boarding. The terrorists on the deck should be vulnerable to snipers. Make sure you synchronize your attacks on the 3 objectives since the terrorists are making frequent radio checkups. The hostages must be escorted back to the rendezvous area without casualties.

TUNIS, TUNISIA (United News International) - Praising the actions of its special forces operatives, the Tunisian government announced that the three-day old hostage situation aboard the Italian luxury liner Rei di Tutto has been brought to a successful conclusion. Tunisian troops boarded the ship early this morning and rescued all hostages. No terrorist group has claimed responsibility for the hostage-taking situation, the second aboard a cruise ship in the last twenty years. International terrorism expert Dr. Seymour Finebold of Colombia University applauded the speed and professionalism of the Tunisian operation, and noted that it could serve as a standard for other counter-terrorism forces to measure themselves against. 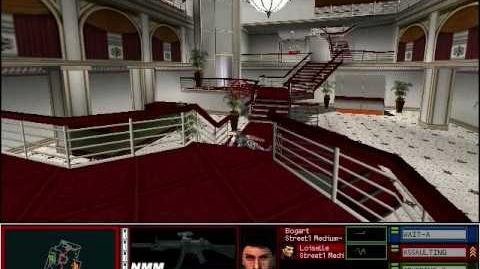