Terrorists from "The People's Parliament" have stormed a television studio in London during a broadcast debate on European fiscal policy. Senior officers from the central banks of France, Spain, and the Netherlands have all been taken hostages. Your mission is to recapture the station with minimal loss of life.

John Clark - The bugs you planted in Vezirzade's house are working perfectly. Now we listen...and wait.

The people controlling the station call themselves the People's Parliament. They're British neo-Nazis - not too organized, but very violent. They've been broadcasting their "manifesto" nonstop for the last four hours - and they say they'll kill the hostages if anyone tries to pull the plug. No slip-ups, ladies and gentlemen - you're going to have an audience for this one.

The hostages are being held in Studio A - it's marked on your map and when you're in the building you should be able to follow the signs. You'll be inserted on the roof. Remember that catwalks cut through the upper levels of all the studios - you may be able to use them to move quickly through the building.

LONDON, ENGLAND (United News International) - British government forces ended a brief stand-off yesterday when they stormed the London studios of television giant Eurovision, killing all members of a neo-Nazi organization who had occupied the building since early morning. According to police spokesman Nigel Fellows, all hostages were released safely, including senior officers from the national banks of France, Spain and Netherlands. The bankers had been scheduled to appear on the program "Europe Today", until the program was cut short by the terrorist's armed assault. The group, calling itself "The People's Parliament", forced studio employees to broadcast a video tape manifesto for over four hours before the police, fearing for the safety of the hostages, intervened. 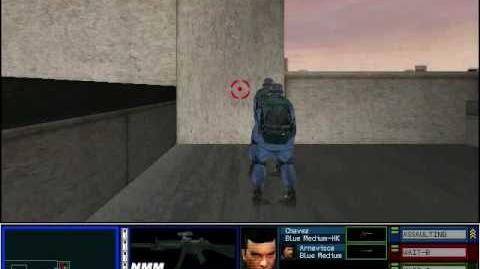