Get to extraction zone

RAINBOW's Russian informant has revealed that a major meeting of Vezirzade's men will take place at his Georgian dacha. Your mission is to raid the meeting and obtain a set of computer files that are believed to contain details of Vezirzade's nuclear weapons purchases.

John Clark - Very clean work in Murmansk. There hasn't been a word of it in the Russian press.

We've finished questioning Rudenko. He sold plutonium to Kutkin twice before - enough material for four low-yield bombs. We don't think Vezirzade has a working device yet - if he did he would have used it already - but the situation could change at any moment. It is absolutely essential that you recover those files, no matter what the cost.

Viktor Rudenko - I am disgraced. I have betrayed both my country and my God. But what else was I to do? There was no money; my men had no food. All that came from Moscow was empty promises. Why should honest men starve while gangsters prosper?

Anonymous informant - The nuclear bombs it was then? That is what was afraid of. Maxim promised that it was only the guns, but he is greedy... and ambitious. Believe me when I say I did not know things had gone so far. Samed will stop at nothing, you know. He will not hesitate to use those bombs on military bases, ports, cities... no matter what the consequences. That is how much he hates the Americans and their friends.

The files you need to recover are located in a computer in the upstairs bedroom. Any member of your team can download the files. This computer has been wired with a self-destruct device that can be set off by a switch on the opposite wall. If you alert the guards the first thing they'll do is trigger the self-destruct. 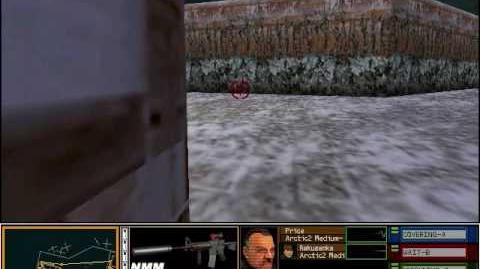