Operation Steel Rose is the fifteenth and final mission in Tom Clancy's Rainbow Six 3: Raven Shield. The custom mission version of the level is Parade Line-Up.

The float concealing the blistering agent has been located near the beginning of the parade route, and must be seized. Gutierrez has surrendered the rough locations of both Gospic and the blistering agent, which he intends to disperse by means of a small concussion device. Your mission is to prevent the detonation of the explosive and eliminate both Gospic and his men.

John Clark - Gutierrez ratted out Gospic to save his own skin, which is good news for us. The float's being prepared on aside street near the start of the parade route. It's guarded by everything Gospic has left, which means that hopefully they're keeping civilians away from it. Gospic himself is somewhere in the area. He wants to watch it go down up close and personal, which means that we can nail him.

We've relayed our findings to the local authorities and the police are already moving people off the streets. They're leaving Gospic to us. Be sure to search the buildings around the float for him and his men.

Kevin Sweeney - With the loss of his aerosol equipment, Gospic has been forced to fall back on a cruder distribution method. According to Gutierrez, he's planted an explosive charge right in the middle of the float, with the blistering agent bundled around it. In the middle of the parade, Gospic's boys are going to abandon the float and the device will blow. It's a tricky balance, but if he's figured the forces right, the detonation could spread the chemical agent over half the city. If he hasn't, the blast will probably just kill everyone for a couple of blocks. It's a lose-lose situation.

Ultimately, Intel believes that this isn't about Rio in particular. It's about the impact an event like this will have across all of South America. The projections that have been run are not pretty. Even the most optimistic leave the door wide open for Gospic - or, more accurately, his heirs - to swoop in on those oil fields and make a killing. Now that we know what's going on, steps can be taken to prevent that, but the first order of business is still stopping Gospic.

Your mission is to prevent the detonation of the explosive and eliminate Gospic. We believe Gospic is on the hotel's roof with some of his men overseeing the final aspects of the operation. However, before getting to him, make sure you diffuse the chemical bomb located on one of the floats. Check your map for the exact location. Some of Gospic's crazier men have orders to activate the bomb as soon as they sense danger, so stay alert. Also watch out for snipers on the roofs and at the windows, because they're watching for you. 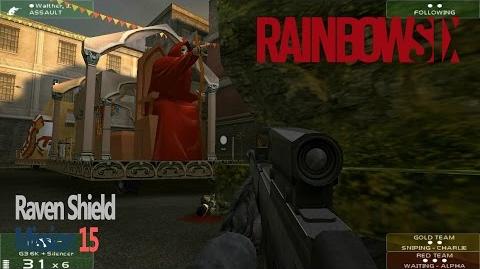