It is also available as a custom mission in Tom Clancy's Rainbow Six 3: Raven Shield in the Athena Sword expansion.

Earlier this evening, armed members of the terrorist organization "Free Europe" seized control of the Belgian embassy in London. Your mission is to retake the embassy with minimal civilian losses.

John Clark - Looks like we've got our first real job. The Brits would love to send in the SAS but the word from Brussels is "no way", and London says the same about the Belgian ESI. I don't have to tell you that we're going under the microscope on this one. There're folks on both sides of the Atlantic who still aren't convinced that there's any need for a group like Rainbow. Take your time and study the situation carefully before you light the fuse. If we blow it the first time out, they may just shut us down.

Members of Free Europe, a British neo-Nazi group, have seized the Belgian embassy in London. The ambassador is hiding in an office on the second floor and has so far avoided capture by the terrorists. Other embassy workers may also be trapped inside. Surveillance indicates terrorists on all three floors of the complex.

RAINBOW's objective is to neutralize all the terrorists residing inside the embassy or to rescue the hostage(s) by escorting them to the extraction zone, with minimal civilian losses. No matter what difficulty the mission is on, RAINBOW still must rescue the ambassador. The ambassador has not yet been detected by any of the terrorists yet, but if a terrorist finds him, he will be executed. If the mission is played on Veteran or Elite difficulty, then there will be a second hostage on the first floor (the ambassador's aide). This hostage is guarded by one terrorist, but the terrorist will not execute her unless if he sees any member of RAINBOW in the embassy. If a hostage is executed or all of the RAINBOW operatives are unable to fight, the mission counts as a failure. If the player succeeds, an image of the ambassador and his aide being guarded by RAINBOW operatives in front of the embassy appears. If the player fails the mission, an image of two dead RAINBOW operatives in the street appears.

The enemy is scattered out on both floors of the embassy, there is a high chance that most of the terrorists will be located on the first floor. On the second and third floors you will find many narrow rooms and corridors, so watch out for enemy fire coming from anywhere inside the rooms or on the far side of the corridors. More terrorists (and one additional hostage) are added if this mission is played on veteran or harder. The enemies do not appear to be wearing any body armor. Frag grenades are often discouraged in this mission, since the terrorists are not in groups. These terrorists are normally armed with Uzis, but on the third floor, terrorists have AK-47s. A well timed assault with each team entering all areas of the embassy could easily result in the mission's success in under two minutes.

LONDON, ENGLAND (United News International) - British government forces ended a tense stand-off yesterday when they stormed the Belgian embassy in central London, killing all members of a neo-Nazi organization who had occupied the building since early Monday morning. According to police spokesman Nigel Fellows, all hostages were released safely, including Giles Doucet, the Belgian ambassador.

Members of the group "Free Europe" masqueraded as employees of a catering company to gain access to the compound. The attack was staged on the 8th anniversary of the founding of the European Union, and authorities have linked the group to the radical anti-Union underground. According to officer Fellows the police had hoped to bring the situation to a peaceful conclusion but were forced to take drastic action when it appeared that the hostages were in imminent danger. 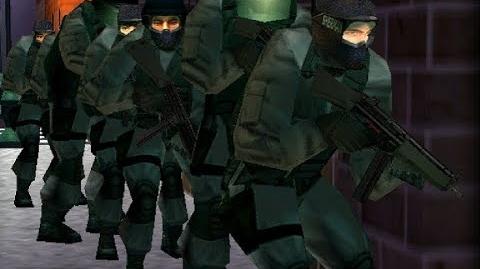