Operation Stone Cannon is the eighth mission in Tom Clancy's Rainbow Six 3: Raven Shield. The custom mission version of the level is Import/Export

An import-export firm in Porto Alegre, Brazil, is allegedly housing what authorities have identified as components of a chemical nerve agent. Surveillance data has been confirmed by details of confessions extracted from several of the terrorists captured on Cayman Brac. Your mission is to raid the company's warehouse and secure all chemical agents on the premises.

John Clark - Since RAINBOW keeps on getting tapped for missions in the Western Hemisphere, a suggestion's been made to keep you stationed out at Langley temporarily, at least until things calm down. In the meantime, we've got a new assignment.

A U.S. Coast Guard cutter intercepted a freighter bound for Savannah. On board were a few hundred kilos of cocaine, approximately twenty crates of assault weapons, and a few million sheets of neo-fascist propaganda. The ship's manifest pointed the Coast Guard to a shipping firm in Porto Alegre, Brazil. Coincidentally, that's the same company some of the prisoners from Cayman Brac mentioned in their plea-bargains.

With that information in hand, the Brazilian government began surveillance of the operation. They hit the jackpot. We've got footage of guns and drugs going in and out of the warehouse. The surprise here, though, is that we've also got video of what looks like chemical weapons containers labeled in Russian.

Technically, this sort of operation isn't under our jurisdiction, but I twisted a few arms and got the assignment. This looks too much like a part of what we're already dealing with for me to let it go.

Kevin Sweeney - You did nice work in Argentina, and now Intel's hoping to return the favor. At this point we can confidently state that the "burglars" at the meat-packaging plant were there to destroy forty years worth of financial records. You'd think a match would have done the job, but they seemed intent on keeping the plant intact.

The good news is, they didn't nick the back-ups. We found those and we're beginning to see why someone wanted the lot destroyed. It's going to take weeks, if not longer, to decipher them, but one thing is clear: that packing plant was used as a cover for a great many things.

As for the import-export firm, the surveillance footage were got shown them moving a lot of gear in and out, including what looks to be top-of-the-line weaponry. Be prepared: they're not going to be firing cheap AK-47 knock-offs when you come through the door. We're still working on getting a final translation on the labels on the shipping containers, but a first look confirms our worst fears. It's the ingredients for VX nerve gas.

VX, in case you were wondering, is a nerve agent that binds to neurotransmitters and block them. It doesn't matter if you touch it or inhale it; the end result is a quick, agonizing death, and the amount required for a lethal dose is tiny. Even worse, the stuff sticks around forever and adheres to damn near any surface you can imagine.

Your mission is to raid the company's warehouse and secure all chemical agents on the premises. Since this is a raid, no one is expecting you. Use this to your advantage, but don't let your guard down even for an instant. These guys are well armed and highly motivated.

PORTO ALEGRE, BRAZIL (United News International) - SWAT teams mounted what police spokesmen in Brazil called the biggest bust of an international weapons ring in the past decade. The streets of Porto Alegre, Brazil echoed with gunfire shortly after sunrise, as police raided an import-export firm with suspected connections to narcotics and weapons smuggling. SWAT officers entered the facility, a warehouse in the commerce district, just after sunrise. After a fierce gun battle, they emerged with several men in custody. While reporters were not allowed into the warehouse following the raid because of continuing security concerns, they did witness crates of what looked to be machine guns and assault rifles being removed from the site under heavy guard. There is no word yet on the identity of any of the men killed or taken into custody. 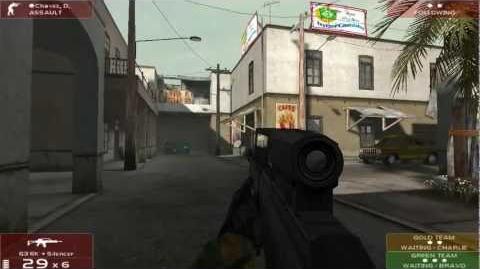