Start a Wiki
watch 02:17
The Loop (Games)
Do you like this video?
For the original version of the mission, see Operation Sun Devil (Rainbow Six).

American and Brazilian nationals have been kidnapped from an Infinario construction site in the Amazon rainforest. They are being held nearby at the stronghold of Ramon Calderon, a known drug trafficker.

James Danko - Alpha Team, we have a situation in Brazil. American and Brazilian nationals have been kidnapped from an Infinario construction site in the Amazon rainforest. I'll let John Brightling brief you on the detail.

John Brightling - Most of the trouble has been on the construction site in The Ark. That's the centerpiece of our whole operation.

Control - The Ark is a self-contained biosphere, an airtight collection of buildings used to conduct experiments on how environments regulate themselves. Air, water, and waste products are all recycled, allowing humans to live indefinitely inside the compound with no contact with the external world - in theory.

John Brightling - Not only in theory! The Ark is designed to be the Earth in miniature, as it were. If we can learn to live responsibly in an ecosystem the size of a city block, maybe we can do a better job with the rest of the planet.

James Danko - Our sources indicate the scientists have been taken to a nearby villa, the stronghold of a narco-trafficker named Ramon Calderon.

Control - Calderon earned himself the nickname "Rotula" (literally, "Kneecap") for the brutal punishments he exacted on Medellin supporters. Calderon is ruthless even by cartel standards, and he doesn't like the idea of a government installation on his home turf.

James Danko - You will insert near Calderon's villa, and you will have two missions, equally important: extract the kidnapped scientists... and shut Calderon down. With extreme prejudice. You'll be dealing with multiple hostiles, so we upgraded your target designators. Now you'll be able to designate your teammates' targets in real-time. Good hunting, Alpha Team. 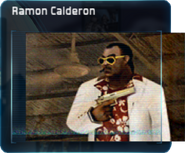 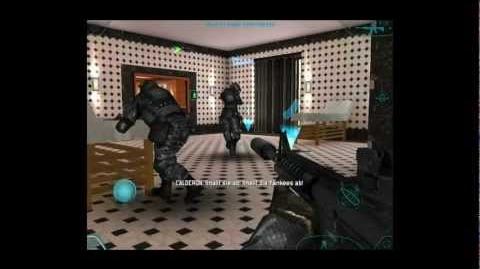