Men identified as working for Gospic have killed an Interpol agent who had infiltrated their operation and seized control of an airport on Cayman Brac. Their baggage, which has been recovered, contains aerosol dispersal equipment intended for use with the blistering agent, the existence of which has been confirmed. Your mission is to secure the airport and neutralize all gunmen.

John Clark - Bad luck for Interpol this time. They had a man infiltrating Gospic's operation from the other side, and he just called in from Cayman Brac airport with the last pieces of the puzzle. The endgame is set for Rio de Janeiro, at the Festas Junitas. The men the agents was working with were involved in smuggling the chemical agent from the Caymans to Rio, so that Gospic could expose the crowds at the festival. We're talking hundreds of thousands of people minimum.

Unfortunately, back-up didn't reach their man in time, and he was killed. The good news, what there is of it, is that the local police have been on a hair trigger lately. They arrived in time to keep at least some of Gospic's people on the island, and contained them within the airport complex. They also confiscated the luggage these jokers were trying to load onto a private plane. It's aerosol equipment, perfect for dispersing the blistering agent. This helps limit the ones who got away. Get to work.

Kevin Sweeney - We have one more tidbit on Gospic himself. On a hunch, I had a look at his medical records. They tell the rest of the man's story. He's got liver cancer, and it's terminal. The initial prognosis was six months. That was two years ago, but he can't keep bucking the odds forever. Looking at his psych profile, I'd say he's a good candidate for a grand suicide gesture, and the blistering agent gives him the perfect tool for the job.

The real twist, however, is what comes after he's dead. We know now from the records at the meat packing plant that he's been squirreling away money for years to support a new global fascist movement. It would be his little goodbye present to the world, a legacy of hate from the Second World War. As part of that, he was targeting tracts of the Venezuelan oil fields for acquisition, with an eye on sabotaging them so the bottom would fall out of the price. The man's literally worth billions, and as soon as he dies it all goes toward resurrecting the jack-booted goose-step.

Your mission is to secure the airport and neutralize all gunmen. It seems that Gospic's men are trying to protect the central hanger, so that should be your main target. Synchronizing a multi-team entry into the hanger should provide you with an element of surprise.

CAYMAN ISLANDS (United News International) - Police and drug smugglers clashed for the second time in days in the Cayman Islands today. SWAT officers were able to round up and arrest fleeing smugglers who were attempting to leave the island in the wake of previous government actions.

Governor Reginald Tinworth of the Cayman Islands congratulated the officers for their speedy work and vowed that there would be no more disturbances like this in the island paradise. 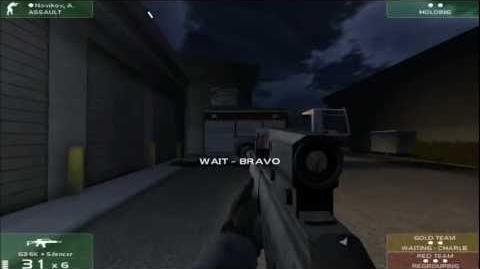