Radical Irish Loyalists, fleeing after a bomb blast in central London, have barricaded themselves in an underground railway station. Your mission is to retake the station and rescue the commuters who are held hostages.

John Clark - Normally, the SAS handles incidents like this on British soil. Unfortunately, their London HRT team is already engaged with a hostage situation in Whitehall, and they're asked for our help.

The explosion was in a flat in Smithfield. When the police showed up the suspects traded shots with them, then made a run for it. They only got as far as the underground station before they were surrounded. They're panicked and extremely well armed - a very dangerous combination.

Kevin Sweeney - It's unusual for a Loyalist group to strike outside Northern Ireland. The explosion was probably not international -- more likely the flat was an underground bomb factory and someone just happened to connect the wrong wire.

Unfortunately, we have very little information about the location of these people inside. You will be inserted through a maintenance tunnel directly into the subway. You must make your way into the station via the rear entrance of the subway car. Alternatively, there are access tunnels that run under both platforms that may aid in the assault. The hostages could be anywhere, so once inside, use your heartbeat sensors to find them. And be careful, the station is large and has many spots that can be easily defended by snipers. 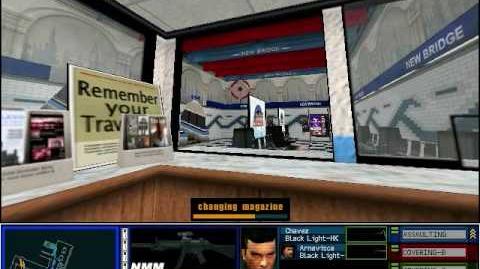