"Sometimes, the only way out is through."
— Oryx

Little is known about Al Hadid's life. He grew up in a small town adjacent to an air force base, and by all accounts led a normal life up until he was torn from his family as a teenager. For over fifteen years, Al Hadid struggled for his freedom and was frequently moved between solitary confinement and different facilities. He eventually broke free and resurfaced in Jordan, but stayed only long enough to obtain a new passport. He learned wrestling in Istanbul, Muay Thai in Bangkok, tactical driving in Berlin, and precision marksmanship in Damascus, likely working for a paramilitary sponsor. Then he disappeared again.

He next showed up as a cadet at Jalal "Kaid" El Fassi's Fortress. As the years passed, his role evolved, from recruit to steward to instructor. Now the unofficial second-in-command, Al Hadid maintains the Fortress during Kaid's absences and acts as a trusted advisor whenever the two of them are together.

Rumors of Al Hadid's ferocity abound, but remain uncorroborated by field reports and should be disregarded.[1]

While his past remains a mystery, Saif “Oryx” Al Hadid’s present is one of extraordinary finesse. While unassuming in everyday life, he is capable of physical feats long considered impossible. Calm, collected, yet impenetrable, he embodies the axiom that still waters do, indeed, run deep.

Saif "Oryx" Al Hadid has lived an exceptional life. Torn from his family as a teenager, he was outside of Jordan - he won't say where - where he was incarcerated. For over fifteen years he struggled for his freedom, moving between solitary confinement and different facilities. The rage he bears as a result of this inhumane treatment is something I have witnessed once, and hope to never see again.

My first meeting with Al Hadid took place not in my own office, but in the well-appointed private sanctuary of Jalal "Kaid" El Fassi. He had told me stories of the warrior forged from raw iron, of his outstanding strength and resilience, but also of the weeks during which the man had sat, unmoving, in the scorching desert heat, waiting for Kaid to open the Fortress' doors.

Though no outward mark remains of his transformation, it is clear Al Hadid is a man thoroughly changed.

We spoke of the ubiquitous cars of Morocco, of his trek, on foot, from Syria to the Atlas Mountains, and of poetry, for which he has a special fondness.

Despite his scars, Al Hadid does not dwell in the past. There is nothing for him there, he said. I wondered if his stoicism hid some deeper longing, but in our sessions since I have found no such indication.

Al Hadid's phenomenal self-control puts my own efforts at mastery to shame. Even Specialist Yumiko "Hibana" Imagawa has commented on the utter calm he exudes. The difference between them is that he allows his control to waver at selected moments, in service of his larger goals. He has turned a crippling affliction into overwhelming strength. This is an extraordinary skill that I have encouraged him to share, when and where he will.

Other operators are making inroads with Al Hadid, but progress is slow. I suspect, like many subjected to the depths of human cruelty, trusting others will not come naturally. Disquieting though it is to admit, Rainbow may be the one place where he is amongst those who can best understand his past.

A Medium Armored Operator, Oryx's unique ability is the Remah Dash. When activated, he performs a quick dash, making him move faster than any other Defender for a short period. While dashing, Oryx can smash through barricades and unreinforced walls, and can knock down any Attackers he dashes into, including shield bearers such as Montagne and Blitz.

Oryx also possesses the ability to vault up though any open ceiling hatches, allowing him to ascend to higher levels quickly.

"Oryx’s jump and dash are marvels of human endurance and adaptability, much like the man himself."
— Mira

Oryx is one of the few Operators that doesn’t need fancy gadgets to hold his own. His body is all the power and utility he needs.

The Remah Dash is his signature move, and it has more than one application. Its speed allows him to roam efficiently and cover short distances with unprecedented swiftness. It can also be used to knock down opponents, which gives him a unique way to deal with an Operator like Montagne.

If you’re up for a gamble, Oryx can also dash through breakable walls, creating a wide opening. Be careful of the cost, though, as he loses health every time the Remah Dash is used for breaching.

Additionally, Oryx has the unique ability to interact with broken hatches. He can climb straight through for a quick rotation, or he can hang on the edge to peek or wait for the perfect moment to go up. As long as he’s hanging, Oryx can also opt to drop down if the climb seems too dangerous.

When Mira showed me videos of Saif's standing vertical jump, I was astounded. I know athletes who have pushed themselves to incredible lengths, but I've never met someone in person - short of Olympians - who could perform feats so clearly contraindicated by human physiology. I had to know how his body worked, and luckily Mira agreed to give me the mandate.

Routine tests showed no abnormal physiology beyond that which was acquired. Upper body strength is disproportionate to the underlying skeletal structure; lower body showed similar signs of muscular hypertrophy and possible hyperplasia. Osteogenic remodeling is consistent with Wolff's law, despite evidence of early and multiple (possibly untreated) fractures; deviations from expected models of regrowth and strengthening are unexpected but not clinically significant.

Saif is, quite simply, a human machine. I observed his daily workout, after which I put him through several standard strength and endurance tests. Testing concluded when I ran out of feats for him to perform, at which point, he thanked me for the challenge and left, all apparently without breaking a sweat. 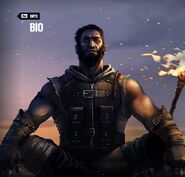 Retrieved from "https://rainbowsix.fandom.com/wiki/Oryx?oldid=70851"
Community content is available under CC-BY-SA unless otherwise noted.