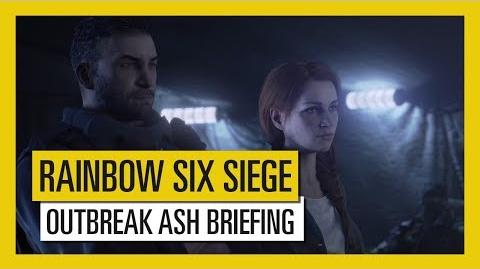 Outbreak was a limited time event in Tom Clancy's Rainbow Six Siege introduced in the Operation Chimera expansion. It featured an exclusive collection of cosmetics, available only during the time of the event.[1]

The Outbreak Event took place in Truth or Consequences, New Mexico, with Rainbow tackling the epidemic that is ravaging the town. Teams of three are sent to combat the threat.[2]

There were two difficulty levels for Outbreak: Normal and Pandemic. While both play the same way, Pandemic featured stronger enemies and friendly fire.[3]

The events of Outbreak took place in Truth or Consequences, New Mexico. There were three different missions available: Blowing up a nursery for the infection, rescuing a doctor who has information regarding Patient Zero and rooting out the source of the infection.

Each mission consisted of three on-site Operators fighting their way through multiple level segments separated by safe rooms. Segments typically involved a semi-linear trek through streets, buildings, and alleyways filled with infected hordes, and interspersed with defensive scenarios where a stationary objective must be protected for a time duration. Some segments offered a degree of freedom in what order their objectives can be tackled.

Dead Operators respawned when their teammates killed all enemies within an area. When all Operators die, the mission would be failed. Operators locked out of a safe room would automatically be joined by their teammates.

There were a number of fundamental gameplay tweaks in Outbreak to accommodate the drastically different setting, particularly with regard to the faster paced and more frantic combat. Among them, the speed of reloading had been increased slightly, alongside a faster time to Aim Down Sights. Barricades and Reinforcements deploy significantly faster (and have unique Outbreak-themed models). Heavy Armored Operators also moved at a faster pace than usual.

Some of the Operators' gadgets had been tweaked. Ash's Breaching Rounds, for instance, detonated immediately upon impact and dealt more damage, behaving like a more traditional grenade launcher. Lion's EE-ONE-D scan also lasted for a longer duration.

The Ping function was also able to highlight clusters of enemies with an orange outline.

All weapons also came with a Flashlight attachment, which could be turned on and off, promoting visibility or discretion against the Roaches.

Operators also had access to different secondary gadgets, including those not typically available to their "side". The only gadgets available were two Frag Grenades, two Stun Grenades, two Smoke Grenades, two Claymores, two Nitro Cells and three Impact Grenades.

Only Glaz, Buck and Lion's gadgets remained unmodified, apart from the number of which they have available.

In Truth or Consequences, New Mexico, a local, Boyd Brooks, sights a falling meteorite and follows it to its crash site. Three days later, Truth or Consequences is under quarantine. Several members of its populace are dying from a mysterious virus. Boyd later shows up at the Sierra County Hospital, his body covered in red spikes, and eyes now turned red.

A week later, Rainbow Operator Eliza Cohen arrives at the now ravaged town, the National Guard holding position against the virus. After assessing the situation, she asks Six to allow Team Rainbow to engage the threat and requests additional support from other Operators to assist in controlling the pandemic. Amongst the selected are James Porter, Jordan Trace, Gustave Kateb, Timur Glazkov, Maxim Basuda, Alexsandr Senaviev, Marius Streicher, Sebastien Côté and Siu Mei Lin. Two CBRN specialists from the GIGN and Spetsnaz CTUs are also recruited to combat the threat: Olivier Flament and Lera Melnikova.

Rainbow is sent to Sierra Paradise, which had turned into a nursery for the virus. Thermite developed specialized Nanothermite Charges to specifically destroy them. However, complications arise when Jäger, the team's pilot, and his helicopter are suddenly struck down, forcing the on-site team to rescue him.

Part 1 of this mission features the team entering the confines of Sierra Paradose ruins for a Search and Defend mission. Placing Nanothermite Charges on the nursery's tendrils, the team must defend the Charges from incoming Roaches. If destroyed, the Charges can be replaced to resume destruction.

Once done destroying all tendrils, the team will receive contact from Jäger, who is suddenly struck down.

Part 2 of this mission features the team, heading towards the wreck of Jäger and his helicopter. His copter had landed in a mechanic's garage, whereas Jäger himself is injured and needs time to pick himself up. In the meanwhile, the team has to defend Jäger from incoming Roaches, including an Apex.

Doc proposes the rescue of Dr. Ellen Mackintosh, a survivor of the Outbreak who was caught in the middle of the virus. Although initially believing the mission to be too dangerous, Ash is convinced by Doc that Dr. Mackintosh may help solve the Outbreak, if Dr. Mackintosh does have a clue to a cure.

Part 1 of this mission features the team entering the Sierra Veterans Wing to secure Dr. Mackintosh. After venturing through halls filled with Roaches, the team will find the doctor in one of the building's outer ruins. The team will have to defend Dr. Mackintosh as she recovers herself. And as the team attempts to extract the doctor to the next area, a Smasher will break through the wreckage of a destroyed ambulance.

Part 2 of this mission features the team escorting Dr. Mackinstosh in an attempt to reobtain the blood samples of Patient Zero as well as a Jet Injector for developing a potential cure. The team will have to face hoards of Roaches in the narrow halls. After securing the assets, the team will make their way outside to a helipad, where they will encounter an Apex.

Ash and Tachanka discuss the origins of the virus. They soon discover that its origins trace back to a Soviet-era capsule. Boyd Brooks had attempted to sell it online, unaware of the danger that lurked within. Thus, both begin plans to secure the capsule that started it all.

Part 1 of this mission features the team heading to the origin of the Infestation: the Nest which is located at Boyd Brooks' junkyard. On the way, the team needs to pick up Thermite's Nanothermite Charge, which they will later use on a door in Brooks' home that's a shortcut to the Nest. On the way, the team will face hoards of Roaches, including at least a Smasher and an Apex.

Part 2 of this mission features the team on their way to the junkyard where the Nest is. The team will face hoards of Roaches once again. Upon reaching the final destination, a barn filled with infested tendrils and the capsule held at the center, the team will have to deploy the Charges on three of the tendril pillars and defend them. Because these Charges cannot be replaced, as well as the fact that the Roaches are swarming to protect their nest, they only have one shot at this.

Due to the type of threat involved, only a few Operators are available. Along with the Recruit, the following Operators have been selected to quarantine the area:

Outbreak features enemies, dubbed "Roaches" by the Rainbow Six Operatives. They are the people infected with the Chimera virus. There are five types of Roaches.[4] 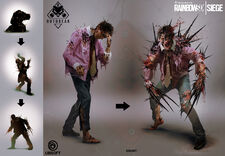 Grunts are the common enemies of Outbreak, either being present on the field upon entering the map or spawning in during in-mission events.

Grunts start off "undisturbed" which is when they are most vulnerable. When alerted, they demorph as alien tendrils cover their body, making them hostile and more durable. Grunts specialize in swarming en masse due to their numbers.

They can also be heard talking or shouting when undisturbed.

Rooters are special enemies that teleport in and out of the battlefield as they launch coral spikes for attacking and trapping enemies.

Appearing alongside Grunts and Breachers, Rooters are the most mobile of Roaches, as they will attempt to teleport away when they take some damage. And when nearing death, Rooters are at their strongest.

Smashers are large and durable Roaches, having mutated so heavily that they feature an armor-like exoskeleton that is basically impenetrable through normal means. These enemies can charge at a rapid pace but are also blind.

Smashers are all around protected except for a weak spot in the form of a red, glowing gash on their back. Although gunfire to the wound will damage the Smasher bit by bit, it is more effective to melee it through "backstab" takedowns. This can be done by provoking the blind Smashers with noise (such as gunshots or explosives) into a wall or obstacle, stunning and making them become vulnerable. Be aware though, unreinforced walls do not count, as Smashers will run through them with ease.

Up to three "backstabs" are necessary to kill the Smasher. Also, getting too close to a Smasher causes them to swing their arms, knocking back all nearby Operators and dealing moderate damage.

Apexes are the "leaders" of the Roaches, as they are able to call in waves of hostile Grunts and Breachers that are stronger than the normal bunch.

The Apex fight from the backline as they summon Grunts and Breachers. From a distance, they will shoot blinding projectiles that block vision and prevent Aiming Down Sights. And if an Operator gets too close, the Apex will knock them away a good distance. 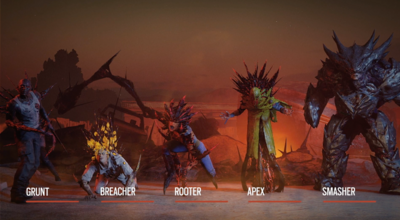 With the exception of Smashers, headshots are more effective than shots of the Roaches' bodies. Depending on the type, Roaches may take several headshots to kill; Apexes are especially tough in this regard. A melee takedown can be performed on the former three types when they are flashed, or when attacked from behind; melee is otherwise ineffective for killing. Grunts and Breachers can be pushed back with a normal melee strike.

Rooters, Smashers, and the Apex do not spawn immediately on the field, as they typically spawn in through some event trigger. The Apex is the only enemy type that will not have more than one of them present at a time.