Parliament is the fifth mission in the PC version of Tom Clancy's Rainbow Six: Lockdown. Its console counterpart is Operation Dragon Hammer.

Onsite coordinator: Alistair Stanley
The Scottish Parliament has been raided by an unidentified terrorist group. Terrorists claim to be holding four hostages, one in particular is Fiona Cathcart. Intel confirmed the presence of a bomb inside the building. Locate and disarm the bomb, rescue the hostages.

An unidentified terror group has attacked Scottish Parliament during a special session on the European Union's efforts in reducing illegal weapon smuggling. The terrorists claim to have four hostages and they're threatening to detonate a bomb if any rescue is attempted. It looks like one of the hostages is Fiona Cathcart. She's a special envoy to the European Union and she also happens to be my niece. I can't order you to make safe return a priority, however, your orders are to secure the building, rescue the hostages, and locate and disarm the bomb. Chavez, you'll be taking McAllen, Jamal Murad, and Pak. Five out. 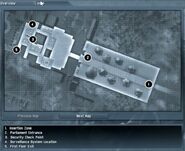 Parliament Mission Walkthrough
Add a photo to this gallery

Retrieved from "https://rainbowsix.fandom.com/wiki/Parliament?oldid=72524"
Community content is available under CC-BY-SA unless otherwise noted.