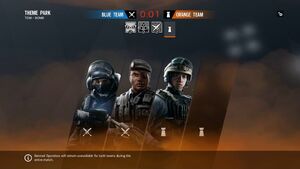 Pick and Ban is a custom gamemode option introduced in Tom Clancy's Rainbow Six Siege in the Operation Para Bellum expansion. Available in the Ranked and Unranked playlists, it allows each team to ban one Attacking Operator and one Defending Operator for the entire match.[1]

At the beginning of a ranked game, you and your team will have 30 seconds to choose an operator to ban. This means that a single operator won't be playable the whole game. You can pick whoever you want to ban, but its a team discussion. The operator that will be banned depends on the number of votes the operator has recieved. Since there are 5 people on your team you have 5 votes, the operator with the majority of votes being banned.

The sixth choice is not shown to the other team.