Start a Wiki
watch 01:51
The Loop (Games)
Do you like this video?
Not to be confused with the The Program.

The Pilot Program is a revenue-sharing deal between Ubisoft Entertainment and select esport teams in Tom Clancy's Rainbow Six Siege. The program offers unique Uniforms, Headgear, Weapon Skins, and Charms to players that are themed around the Pro League and esport teams participating in the Pilot program. Revenue obtained from the purchase of these items is then shared with teams participating in the program.

Phase 1 of the Pilot Program was first announced on June 5, 2018 and launched on September 4, 2018 to coincide with the release of Operation Grim Sky. It involved eleven teams across Europe, North America, Latin America, and Asia-Pacific. All new teams to the Rainbow Six Pro League were automatically chosen for the Pilot Program. Additionally, veteran teams were chosen based on their League growth, experience, and competition results.

Each team originally had a unique weapon skin and charm that was themed around their team. Two team, SK Gaming and Vitality, later left the program. The remaining eight teams had themed uniforms and headgears created and were released on December 4, 2018 alongside the Operation Wind Bastion expansion.[1] 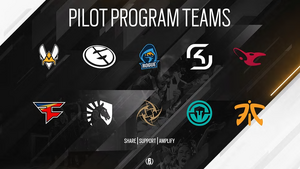 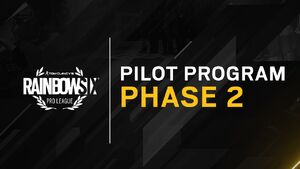 Phase 2 of the Pilot Program started on September 9, 2019 alongside the release of the Operation Ember Rise and will conclude in May 2020. It currently involves fourteen teams across all four regions, with two more teams expected to be added to the program in the future. Existing and new teams had to submit an application to be considered for Phase 2 of the program. This application held questions relating to a teams roster, background, community support, involvement, promotion, etc. As with phase 1, each team had a uniquely themed headgear, uniform, weapon skin, and charm created.[2] The second wave of weapon skins for the program was released on November 14, 2019.[3] The third wave was released on February 18, 2020.[4]

Phase 3 of the Pilot Program was announced on February 16, 2020 in the Official Rainbow Six Discord server. A launch date of the phase has yet to be announced. Phase 3 will make provisions to expand the program to up to 44 teams globally, up from 14 teams in Phase 2. The program will be split into three tiers based on the strength of the relationship with the org. Tier 1 will have 10 teams, Tier 2 will have 15 teams, and Tier 3 will have 19 teams. The Pilot Program will include more choice in bespoke cosmetics for organizations, and support for teams, players and content creators.

Retrieved from "https://rainbowsix.fandom.com/wiki/Pilot_Program?oldid=68626"
Community content is available under CC-BY-SA unless otherwise noted.