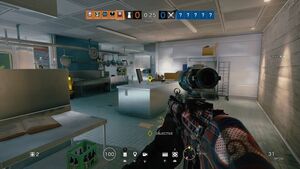 A Ping is a gameplay feature of Tom Clancy's Rainbow Six Siege. It allows players to place a marker on a location, giving teammates contextual cues to the location of enemies, gadgets, etc.

Only one marker may be placed at a time and will last for eight seconds apiece. There is a five second cooldown time between the placement of markers. Markers can only be placed when controlling an Operator directly instead of a Drone or camera. Additionally, their placement is dependent on the player's center field-of-view. 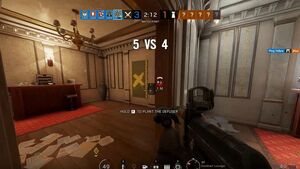 Retrieved from "https://rainbowsix.fandom.com/wiki/Ping?oldid=75100"
Community content is available under CC-BY-SA unless otherwise noted.