"One of the most iconic settings for a CTU operation, this presidential plane offers an exotic and unique siege experience. It is claustrophobic, tense and constrained, involving limited breaching opportunities and sight lines."
— Ubisoft Description

Presidential Plane is a map featured in Tom Clancy's Rainbow Six Siege. It is a remake of the map 747 from past Rainbow Six installments.

This map is used in Situation 4: Tubular Assault. In this situation, you play as Ash, who's job is to clear the plane of terrorists. Unlike regular Terrorist Hunt, there are fewer terrorists and no reinforced rooms, with all the terrorists being Loners. There are no bombers and little to no deployable shields. The main focus of this Situation is Ash's gadget and leaning.

The map is filled with Easter Eggs, with animated objects on the walls. Bullet holes and melee marks on walls appear as stars. Wall sections destroyed by explosives or a sledgehammer will have explosions doodled around them. The flowers on walls "cry" when the petals are damaged. Gift boxes can be broken to reveal plushy toys. The in-flight announcement heard near the cockpit and the staff section pokes fun at aspects of the game, with instructions to stow all ACOGs in the overhead bins, to remove Smoke from the non-smoking flight, to brace from a turbulence that is actually Nomad's airjab, and to remain knocked out for medical help. 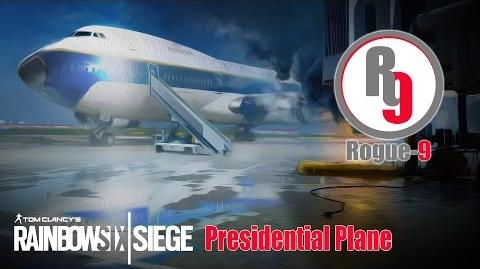 Presidential Plane as it appears in Tom Clancy's Elite Squad.