< Pulse
View source
watch 02:59
Metroid Dread - The Loop
Do you like this video?
Play Sound

"In a life threatening situation, the average person's heartbeat can be upwards of 175 beats per minute. A well trained tango is able to stay cool, keep calm. Their heart rates can be 70 to 100 beats per minute. But by the time I'm done, that number goes down to zero."
— Pulse

Jack Estrada was born on October 11 at Seymore Johnson Air Force Base, North Carolina. His father, Mark Peterson, was a pilot while his mother Cynthia Estrada was a classified Senior Intelligence Officer. Jack was raised on bases across the US and internationally, in Germany, Turkey, and Japan. Estrada demonstrated acumen for science at an early age and was quickly moved into an advanced curriculum. His focus on Forensic Science and Biochemistry made him a perfect fit for the Biometrics Program with the FBI, which he joined as their youngest intern in 2007.

In 2010, he secured his role as an agent and was soon recruited into FBI SWAT, working both in the field and in the FBI Lab. Estrada's high emotional intelligence led him to join the FBI's Hostage Rescue Team (HRT) where he excelled in crisis management and negotiation tactics. His knowledge of behavioral biometrics let to the creation of the Cardiac Sensor, along with several other prototypes which he continues to refine.[1]It is shown that he is in a secret relationship with Yumiko "Hibana" Imagawa.

As a result of the constant relocation from base to base, Jack was fascinated by the microscopic variances that comprise identity. He became adept at recognizing micro-expressions and delineating a person's history based on their speech patterns and physicality.[2]

During operations, Specialist Jack "Pulse" Estrada keeps his cool and consistently maintains sound judgement. So to meet someone with such boyish enthusiasm was an entertaining surprise for me. The conversation was a lively circuit of topics from biology, fighter jets, and scuba diving, to something his father builds in his spare time: Muscle cars. I honestly had never heard this term before. It completely baffled me. Estrada had to show me pictures. […]

We discussed his childhood fascination with biology and chemistry. That he wanted to be an astronaut, and jokes that he still might be. He's fascinated with the concept of alien life-forms. Which, upon mentioning it, prompted him to describe his deep-sea diving expeditions with bouncing excitement. […]

What does make Estrada quiet and contemplative is the mention of his mother. He becomes serious and there's a wistful tone in is voice. It was his mother who first noticed how good he was at deconstructing micro-expressions. She encouraged free-thinking and let him decide the pace of his academic studies. A naturally private person, her work in military intelligence made her even more so, but because Estrada can so easily read others I think it bothers him that he's unable to read his mother at all. […]

Life is a sense of adventure and Estrada is ready to grasp it all. It's a healthy attitude and I wonder how his upbeat energy affects the group. Estrada told me that he's working on being more in the moment, "slowing time." He's striving to be more mindful. I asked if anyone in particular had encouraged this new point of view, but he avoided the question. […]

Even under the most extreme conditions, Estrada puts his team first; naturally they all speak highly of him. Estrada says it's the caliber of his teammates that makes him so dedicated. […] He and Specialist Jordan "Thermite" Trace are close, but there is some professional rivalry between Estrada and Specialist Monika "IQ" Weiss. They seem to enjoy goading one another. I'm not concerned. If anything, it benefits Estrada to be challenged once in a while.

A Light Armored Operator, Pulse comes equipped with his HB-5 Cardiac Sensor which detects the heartbeats of nearby enemies through obstacles.

While working in the FBI biometrics program, Jack developed a portable device capable of tracking a suspect’s blood flow and heartbeat. The portable cardiac sensor proved a useful non-invasive interrogation tool as the operator was able to monitor the stress level of suspects and reliably determine their truthfulness.

The sensor was then equipped with a higher resolution screen and programmed to determine the relative distance of targets. The modified Cardiac Sensor was successfully implemented into the FBI SWAT team’s surveillance counter-measures where sniper spotters and negotiators have effectively used the device to locate hostiles behind cover or from a secure location.

Hey, Mira. As per your request, here are the specs for my HB-5 Cardiac Sensor. In a nutshell, the sensor uses microwave radiation to detect heartbeats because microwave radar technology has enough fidelity to distinguish human from animal heartbeats. My device takes it a step further by allowing you to "silence" the heartbeat of friendlies. It still detects them, but it doesn't alert you in order to reduce the noise while information gathering. Now here's the caveat... I've already patented the HB-series and the latest variations will be sent to various emergency management organizations to help locate survivors at disaster sites. While I've used it in hostage situations, the original intent is to help urban search and rescue teams. This is first and foremost a humanitarian tool, and my copyrights will guarantee that.

Pulse armed with a UMP45 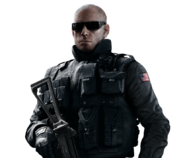 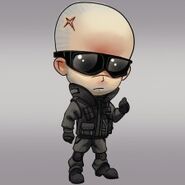 Pulse in the "Siege the Day" trailer

Pulse about to eliminate Hibana (The Program) 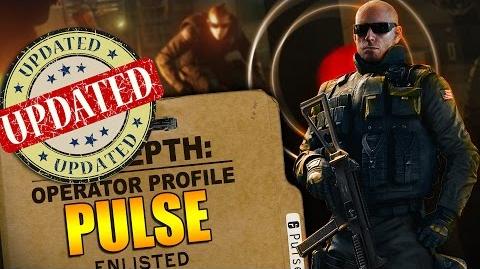