Edit
watch 02:34
Fire Emblem Warriors: Three Hopes - The Loop
Do you like this video?
Play Sound
This article has a Codex Entry.

"Dissolves the Sprawl present in the environment when aiming at it.
This upgrade is automatically equipped on all Operator weapons."
— In-game Description

The REACT Laser is an attachment featured in Tom Clancy's Rainbow Six Extraction. Available as the only Tier 5 gadget, it is unlocked at Development Milestone 25 and is automatically equipped on all weapons.

When active, it will shoot a laser beam to quickly clear Sprawl off of surfaces when aiming or cause a small amount of damage to enemies. The REACT Laser can be toggled with the REACT UV Light during gameplay. It will deactivate while sprinting.

The REACT Laser serves as a valuable tool on higher difficulties or in the Assignments and Maelstrom Protocol where players may quickly be swarmed by enemies. It can also be used to destroy Blinding Spores and Sower Mines. 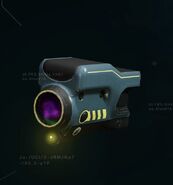