Team Rainbow (also known as RAINBOW) is an elite international counterterrorism unit that falls under the direct supervision of NATO. The unit was formed to combat terrorist actions worldwide in a more effective way by assembling a team of elite counterterrorist operatives from nations all over the world.

Since its formation in 1999, Rainbow has prevented several terrorist plots since its activation but was deactivated in 2012. The unit was reactivated three years later under a new director codenamed "Six", to combat the White Masks and their widespread terrorist attacks.

In 1996, John Clark wrote a memo to the CIA expressing concerns over the rise of international terrorism since the end of the Cold War and recommended the creation of a NATO response team to rapidly deploy to terrorist situations. The memo read:

There is good news and there is bad news. With the demise of the Soviet Union and other nation states with political positions adverse to American and Western interests, the likelihood of a major international confrontation is at an all-time low. This, clearly, is the best of good news.

But along with that we must face the fact that there remain many experienced and trained international terrorists still roaming the world, some with lingering contacts with national intelligence agencies—plus the fact that some nations, while not desirous of a direct confrontation with American or other Western nations, could still make use of the remaining terrorist “free agents” for more narrow political goals.

If anything, this problem is very likely to grow, since under the previous world situation, the major nation states placed firm limits on terrorist activity—these limits enforced by controlled access to weapons, funding, training, and safehavens.

It seems likely that the current world situation will invert the previous “understanding” enjoyed by the major countries. The price of support, weapons, training, and safehavens might well become actual terrorist activity, not the ideological purity previously demanded by sponsoring nation states.

The most obvious solution to this—probably—increasing problem will be a new multinational counterterrorist team. I propose the code name Rainbow. I further propose that the organization be based in the United Kingdom. The reasons for this are simple:

For all of these reasons, the proposed special-operations team, composed of U.S., U.K., and selected NATO personnel, with full support from national-intelligence services, coordinated at site...

With backing from then CIA Director Ed Foley, Mary Pat Foley, General Mickey Moore, and selected others, Clark was able to get President Jack Ryan to approve the organization. Rainbow was officially formed in 1999 and was established at Hereford Base, United Kingdom. John Clark was given command of the unit as well as the simulated rank of Major General and the codename, "Six".

Rainbow's first major operation was combating several terrorist attacks orchestrated by Horizon Corporation CEO John Brightling of the Phoenix Group. Brightling had planned to unleash the Ebola Brahma virus at the 2000 Summer Olympics in Sydney, Australia in order to decimate humanity and put an end to pollution. Rainbow was able to successfully stop the dispersal of the virus and arrested Brightling and his coconspirators.

Throughout 2001 and 2003, Rainbow was faced with several attempts by Samed Vezirzade to distribute nuclear weapons to terrorists across the world. Despite their efforts, Maxim Kutkin of the Russian Mafia was able to secure two portable nuclear devices from Vezirzade. Rainbow successfully retrieved the weapons and killed Kutkin who had attempted to cause a meltdown at a nuclear power plant as a fall back.

Between 2005 and 2007, Nikola Gospić conspired with Venezuelan Presidential Candidate Alvaro Gutierrez to conduct a series of terrorist attacks around the world in order to create an economic crisis in South America and cause the price of oil to plummet. Gospic then planned to buy the oilfields and use the proceeds to fiancé a new internal fascist movement. To accelerate his plans, Gospic attempted to release VX nerve gas in Rio de Janeiro. Rainbow successfully stopped these attacks and prevented the release of the nerve gas. Gospic was killed in the final raid and Gutierrez was imprisoned for his crimes.

In 2009, the Global Liberation Front stole an illegal bio-weapon known as Legion. The organization's leader, Bastian Vanderwaal then sought to distribute the virus to various terrorist organizations across Europe. Rainbow neutralized these organizations and secured the virus after killing Vanderwaal and the remainder of his forces at a compound in Cala Brescana, Menorca.

In 2010, John Clark retired from Rainbow and was succeeded by Domingo Chavez as Director of Rainbow. The same year, Rainbow engaged terrorists during several attacks spanning across Las Vegas and Mexico. Rainbow Operator Gabriel Nowak unexpectedly betrayed Rainbow after killing several operatives and prepared to sell information about the organization to terrorists in exchange for nuclear warheads. After a final confrontation with his superior, Bishop, Nowak was killed and Bishop was promoted to Deputy Director by Chavez.

With the threat of terrorist incidents at an all-time low, Rainbow was disbanded in 2012. Unfortunately, this resulted in a surge of terrorist attacks along with the emergence of the White Masks. With Rainbow now needed more than ever, Aurelia Arnot reactivated Rainbow in 2015. In early 2018, Arnot created the CBRN Threat Unit within Rainbow to counteract the growing threat of biological and chemical threats. A few months later, she created the Urban Tactical Response Team as Rainbow's testbed for operations in dense urban centers. The new unit drew on such expertise as riot-officers for mob behavior and intelligence operators for converting local assets and building allied networks. In early 2019, Arnot accepted the position of US Secretary of State. With her recommendation, Harry Pandey became her direct successor.

Harry sought to improve the synergies of each Operator and began to perform psych evaluations on every Operator to gain a better understanding of them. Additionally, he made Maria Alvarez the acting Director of Rainbow's R&D division in order for her to make improvements on all Operator equipment. Harry conceived The Program as a result of the continued global threat of terrorists and sought to decentralize Rainbow and build team relationships. Harry later found an abandoned Stadium in Elis, Greece and had it renovated to serve this purpose. To ensure the safety of each Operator, Harry had Mira develop the SIM-SUIT so that simulated rounds could provide realistic feedback akin to real ammunition. In January 2020, Harry launched the first annual Tournament of Champions at the Stadium under the guise of a public training exercise for CTUs across the globe.

In August 2020, Harry established the Rainbow Operation Staff which sought to recruit instructors that were specialized in several areas of expertise. Sam Fisher was recruited as the first instructor.

Based at Hereford Base, England, Rainbow is a multinational special operations task force operating under NATO supervision, Rainbow was formed in 1999 to combat the rise of terrorist "Free Agents" following the collapse of the Soviet Union. Since its formation, the unit is always run by a Director and Deputy Director. Operatives are recruited from the world's leading counter-terrorism and special forces units including Delta Force, SAS, GSG-9, Spetznaz, etc.

During its formation in the 1990s, Rainbow was "blacker than black", its American funding directed through the Department of the Interior by Congress, then through The Pentagon's Office of Special Projects, with no connection whatsoever to the Intelligence Community. At the time, less than a hundred people in Washington, D.C. knew that Rainbow existed. 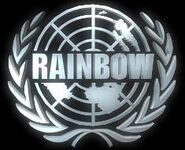 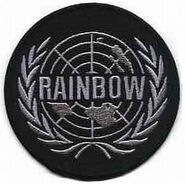 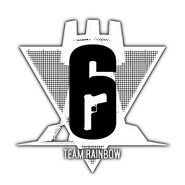 Rainbow logo as it appears in Arknights
Русский
Community content is available under CC-BY-SA unless otherwise noted.
Advertisement