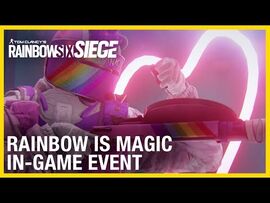 "Straight from your childhood and back to the battlefield, it's the return of Rainbow is Magic!"
— Event Description

Rainbow is Magic is an April Fools-themed limited time event in Tom Clancy's Rainbow Six Siege that was originally introduced during the Operation Burnt Horizon expansion.[1]

Rainbow is Magic takes place on a special variant of the map Presidential Plane known as Air Cute One. The map features a dramatic visual overhaul, taking place as a toy set within the Kid's Bedroom on the prereworked version of House. The gamemode itself is a variation of Hostage, with the hostage in question called Mr. Bear who has a unique model and animations. The announcer is also replaced with a joyful, feminine voice with special voice lines, describing the game as if it were a children's book instead of a hostage rescue. Available Operators are modeled after army men except for Smoke, Montagne, Tachanka, and Blackbeard who wear bright pink outfits with the themes of a leopard, butterfly, unicorn, and princess, respectively.

The event limits each side to choose from six Attacking and Defending operators.

As with other events, Rainbow is Magic features limited-time Alpha Packs containing Headgear, Uniforms, Weapon Skins, and Charms that are themed around the event. There are 21 cosmetic items in the Rainbow Is Magic Alpha Pack collection with no duplicates awarded in packs.

All players are awarded a free Alpha Pack for logging in for the first time during the event. Afterwards, packs are obtained through completing Ubisoft Connect challenges or by purchase. Alpha Packs may be purchased with Renown alongside R6 Credits. 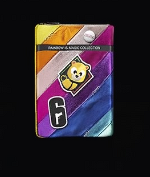 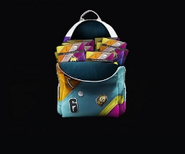 Players may purchase event cosmetics with R6 Credits in bundles for each Operator featured in the event. 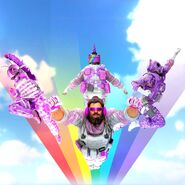 Drone skin for the event 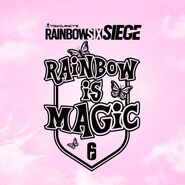