Edit
watch 02:34
Fire Emblem Warriors: Three Hopes - The Loop
Do you like this video?
Play Sound
Not to be confused with the Barricade

Reinforcements are a fortification gadget featured in several installments of the Tom Clancy's Rainbow Six Franchise. They can render breachable walls and hatches invincible to regular breaching gadgets.

"The contraption itself is something of our own creation and we spent a lot of time thinking about how to do this in a functional but realistic way. We arrived at the idea of having interlocking metal components that are spring loaded at the base. You activate the wall and once it’s reached full length, pistons attached to it will shoot through the wall and expand, locking it in place."
— Rainbow Six Siege Blog

Reinforcements are featured in Tom Clancy's Rainbow Six Siege and Tom Clancy's Rainbow Six Mobile. They are available to Defending Operators in multiplayer as well as White Masks in Training Grounds. They can only be breached by Thermite, Hibana, Maverick, Ace, Hard Breach Charges and Engineer-type White Masks. In Outbreak mode, they were available for all Operators once picked up and could be breached by Breachers.

Wall Reinforcements can only be placed on fully destructible walls (i.e. walls with wooden supports or no supports). Most destructible walls in Rainbow Six Siege are divided into 2-3 equal sized sections, with one Reinforced Wall covering one section when reinforcing. Reinforced Walls are always deployed to cover one section, and cannot be freely placed on any location of a wall. The width of a Reinforced Wall is dependent on the section it is reinforcing. Some of the smaller walls only need one Wall Reinforcement.

To place down a wall, players need to go up a wall, hold down the placement key while the animation runs, and once the animation is complete, the section of the wall players have selected to reinforce is now reinforced. The entire reinforcement animation takes 4.5 seconds to complete. If the player lets go of the placement key, the reinforcement will be canceled and the wall will be returned to the player's inventory. The process will not be interrupted if the player is shot, but will not be successful if they are killed before it is complete. This can be useful, though, as it allows players to quickly react to any unexpected breaches. Reinforced wall's bulletproof cover will also protect players as they are being placed, and not before.

When the wall reinforcement "bar" is placed on the ground during the deployment animation, it will squash and destroy any gadgets placed beneath it. During deployment, it will destroy all gadgets and map props placed on the wall. If a non-reinforced destructible wall is destroyed, players can still reinforce it by going up near it. If a reinforced wall is destroyed, players cannot re-reinforce it. Reinforced walls have fixed heights, though map walls can be higher and thus leave a small unreinforced section at the top, allowing Attacker projectiles to be thrown over.

Reinforced Walls are also consumed when reinforcing trap doors, or hatches. Trap doors can only be reinforced from the topside, so players will have to venture out to find the top. The trap door reinforcement animation plays through 4.5 seconds, similar to a Wall Reinforcement.

Reinforced walls can be breached by the Attackers: Thermite, Hibana, Ace along with Maverick, each with a different approach. Mute's Signal Jammer can prevent Thermite and Hibana's charges from detonating, and Bandit's Shock Wire and Kaid's Electroclaw can prevent or destroy breaching charges by electrifying the wall. Maverick's blowtorch cannot be countered by either, however, and he can create small holes in the wall to get rid of any wall defenses, leaving it vulnerable to the other Attackers' gadgets. Certain Operators also have the Hard Breach Charge, which creates a vaultable hole when placed on a reinforced wall.

Promotional image depicting a Reinforced Wall during the Pre-Alpha

Reinforced Wall as seen during the Pre-Alpha 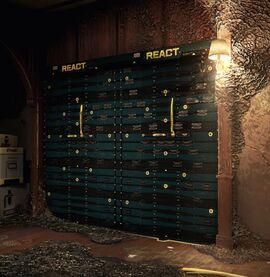