"This Tournament of Champions is only the beginning. We must train until there are no more fights to win! It begins here. It begins today."
— Harry Pandley

Due to the continued global threat of terrorists, Harry Pandey conceived of The Program in order to decentralize Rainbow and maximize operation ability. He believed that if Operators had a place to live and train together, they would have a better understanding of one another and became stronger teammates as a result. Harry later found an abandoned Stadium in Elis, Greece and had it rebuilt to serve this purpose. To ensure the safety of each Operator, Harry had Mira develop the SIM-SUIT so that simulated rounds could provide realistic feedback akin to real ammunition. He later recruited Operators Kali and Wamai from NIGHTHAVEN before throwing the first "Tournament of Champions ". The tournament serves as the ultimate test of everything the Operators have learned since The Program started.

The event takes place on the on the map Stadium with the same rules as the Unranked playlist. The only gamemode available on the map is Bomb. All Operators are available for use during the event, even those players do not currently own.

The event features its own Battle Pass and is composed of 35 tiers across a Free and Premium track. Each tier rewards players with exclusive customization items, Alpha Packs, currency packs, and boosters for a total of 50 rewards. Progression towards the Battle Pass can be earned in any playlist (excluding Terrorist Hunt) including the Road To S.I. 2020 event. The pass will cease at the end of the event on February 16, 2020.[2]

. Season Pass holders have a 30% discount on these prices as well as a 30% boost on the amount of Battle Points earned. 30% of all revenue generated by the Premium Track will go towards the Six Invitational 2020 prize pool. 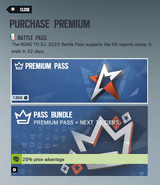