Born in Toronto, Ontario, Canada. Father is a senior officer with the Royal Bank of Canada. Mother is deceased. One sister, still a resident of Toronto. Joined the Canadian Army as a Field Engineer, 1981. Served one tour of duty, 1981-85. Received advanced training in both combat diving and explosive ordnance disposal. Upon discharge joined the Royal Canadian Mounted Police (RCMP) and in 1988 became a member of the Special Emergency Response Team (SERT), the RCMP's elite counter-terrorism unit. When SERT was disbanded in 1993, he helped coordinate the transition of counter-terrorist responsibilities to the Canadian Armed Forces' newly formed Joint Task Force Two (JTF-2). McAllen re-enlisted in 1994 and became a full member of JTF-2 the same year. He has participated in counter-terrorist actions on three continents, including the JTF-2 extended operations in 1996-97 against war criminals in Bosnia. Married in 1984, divorced in 1992. One child, a daughter, born 1986, lives with her mother in London, Ontario. McAllen is a specialist in multiple areas. He is an excellent shot and is extremely aggressive in combat situations, making him a good choice as a member of an assault team, but he also has extensive experience with bomb disposal and demolitions. He is an amateur power-lifter and his strength and stamina make him a formidable opponent. Team leads should be warned that he performs better in a subordinate rather than a command position. He has a hearty, good-natured manner and spends his off-duty time socializing with a wide circle of friends, most of them current or ex-military men. 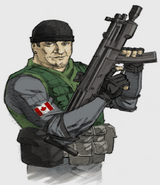