Start a Wiki
watch 01:18
'Rainbow Six' Profile: Rook
Do you like this video?

Julien Nizan was born on January 6, 1990 in Tours, France. Nizan was the youngest son of a working-class family. His father was a respected stone mason while his mother held numerous jobs. Both of them informed his sense of architectural design and precision, helping him earn top rankings in school. Along with Nizan's intellectual interests, he excelled in athletics from an early age, including Track & Field, fencing, and cycling. He later dropped out of university to cycle across France. At age eighteen, the Gendarmerie enlisted his father for an anti-corruption sting with local businesses. Nizan was fascinated by the level of planning required by the police. He subsequently enlisted in the Gendarmerie Nationale and was assigned to the Highway Patrol Unit.

Nizan's father is a stone mason, which requires imagination, precision, and dedication. His mother's ability to explore different vocations with verve - bookkeeping, street busker, florist, tour guide, sommelier, and chef - all strongly influenced how Nizan adapts to challenges and what goals he sets out for himself. […] THe field reports reflect some of Nizan's chameleon-like way of merging into whatever role is required. This kind of versatility is rare - I've asked leads such as Specialist Gustav "Doc" Kateb and Miles "Castle" Campbell to challenge Nizan more during operations. […] 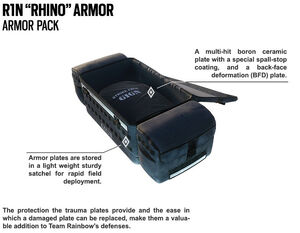 Retrieved from "https://rainbowsix.fandom.com/wiki/Rook?oldid=59706"
Community content is available under CC-BY-SA unless otherwise noted.