Edit
watch 02:34
Fire Emblem Warriors: Three Hopes - The Loop
Do you like this video?
Play Sound
This article features a Codex entry.

Rooters are organisms produced by the Chimera Parasite in response with the need to quickly corner and immobilize threats within its environment. During the initial infestation stage of the Chimera Parasite, hosts are infected and mutated into Rooters. On Earth, Rooters were initially produced through the infection of humans during the 2018 outbreak in Truth or Consequences, New Mexico. Females are the preferred hosts to become Rooters, possibly due the increased speed from their slender frames.

Once infected, the host is driven insane as their appendages are elongated and replaced with razor sharp carapace blades. Large Spikes will also grow out of their heads to protect their vital points. These blade appendages enable a Rooter to move quickly on all fours. When alerted to threats, human Rooters will plant their blades into the ground, launching tendrils towards hostiles and trapping them in place. It is also capable of using this ability to disappear into the ground and reemerge at another location. 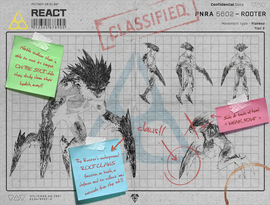 The Parasite later adapted to start assimilating organic matter into itself rather than infecting hosts. Through Sprawl, it started producing Archæan Rooters in lieu of human Rooters. Like a human Rooter, an Archæan Rooter is predominantly quadrupedal but features a more alien appearance. With the introduction of the Tormentor, Archæan Rooters have lost the ability to sink into the ground. As a result, the Parasite has made them more muscular to increase their strength at the cost of some speed.

Archæan Rooters retain the same role of trapping threats within its environment which is accomplished by projecting viscous tendrils of Sprawl along the ground. Contact with the tendrils will immobilize target and cause damage by attempting to penetrate the target's armor. REACT scientists have theorized that this is done in an attempt to feed off and/or infect threats.

Rooters display a sentry-like behavior. They will actively seek out threats within a biome and will destroy obstacles in their way. When in close quarters, they will attack with their carapace-hardened appendages. 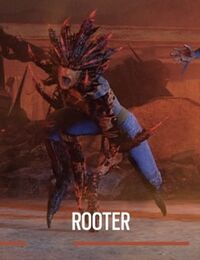 Rooters are special enemies that teleport in and out of the battlefield as they launch coral spikes for attacking and trapping enemies.

Appearing alongside Grunts and Breachers, Rooters are the most mobile of Roaches, as they will attempt to teleport away when they take some damage. And when nearing death, Rooters are at their strongest. 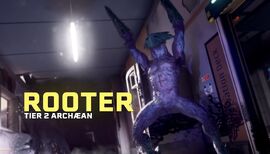 Rooters are Tier 2 enemies that appear in Tom Clancy's Rainbow Six Extraction. Rooters will actively patrol areas and will immediately investigate any noises. Once alerted, they will head towards players and launch tendril spikes in the ground in front of them. This will damage and immobilize any player directly in their path, leaving them vulnerable to attack by other enemies. If caught, players can shoot the Rooter to be released from its tendrils.

A Rooter's weak point is located on the side their necks. This can be hard to hit due to the carapace spikes shielding its head. This can be countered by have one player distract it while the other targets its weak point. Should a player get too close to it, a Rooter will use its arms to strike. As with other enemies, they can be dispatched effectively with a Takedown after being stunned.

Eye In The Sky (Alaska) 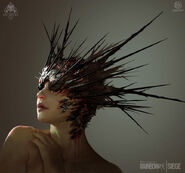