The SCAR-H CQC is a weapon featured in Tom Clancy's Rainbow Six: Vegas.

The weapon is a high damaging weapon that takes out terrorists with only a few rounds. Ammunition is not that prevalent for the weapon in story mode due to terrorists only using it in select areas of the story. Terrorists never actually use the weapon in Terrorist Hunt. The sights are good, but a player might suffer at range, since the target could get lost in the small iron sight of the weapon. The weapon is Gabriel Nowak's preferred rifle in the Mexico mission.

The weapon is above average in multiplayer because it is a high damaging, slow firing weapon. The rate of fire is rather forgettable but the accuracy and range easily make up for this. The weapon is Gabriel Nowak's preferred rifle in the Mexico mission.

The SCAR-H CQC is a weapon featured in Tom Clancy's Rainbow Six: Vegas 2. Since Vegas 1 and 2 share the same engine and models, the weapon appears in the same configuration as its Vegas 1 counterpart.

A player character takes cover with his SCAR-H CQC. Note the stock which gives it away as the first generation SCAR-H.

The iron sights of the SCAR-H CQC 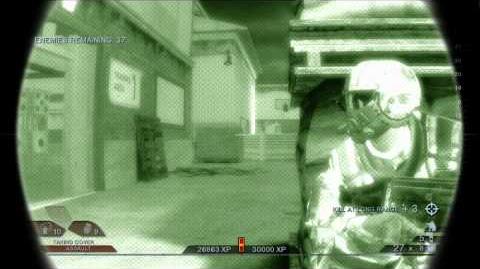 The SCAR-H CQC was set to appear in Tom Clancy's Rainbow Six: Patriots before its cancellation. The weapon was seen in the announcement trailer for the game.

The SCAR-H CQC seen in the announcement trailer

The SCAR-H CQC seen behind a "True Patriot"

The Mk17 CQB is an assault rifle featured in Tom Clancy's Rainbow Six Siege. It was introduced in the Operation Dust Line expansion and is available for use by Blackbeard.[1]

The Mk17 CQB suffers from a dreadful damage output that puts it on par with the UMP45. Combining an underwhelming single-shot damage of 40 and an extremely slow fire rate of 585, the Mk17 CQB is the weakest Assault Rifle with the slowest Time To Kill of its class against Operators of all Armor Ratings. To top it off, the Mk17 has a measly magazine capacity of 20+1 rounds. Equipping Blackbeard's Rifle Shield gadget significantly lengthens the Mk17 CQB's ADS time.